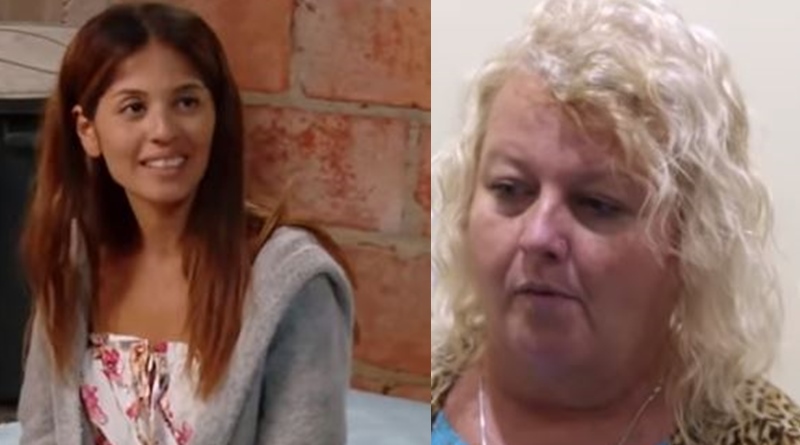 90 Day Fiance alum, Laura Jallali managed to distract fans away from Paul Staehle’s never-ending marriage woes over Christmas.  Following the Jonh Yates live interview that Evelin did with him ahead of Christmas, Laura vowed revenge. She said at the time, that Evelin’s “evil,” and she would tell her “truth” about it, “soon.” Well, she did that on Christmas Day. But, a lot of fans who don’t follow Instagram closely seem a bit unsure what the problem with Laura could be.

2019 turned out as a failure file for Laura Jallali. When we first watched The Other Way, she seemed in an idyllic place with Aladin Jallali. She traveled to Qatar and took wonderful vacations in Tunisia. Para-sailing, quad biking, fun in the sun seemed the order of the day. Despite using filters on social media, and being much older than Aladin, many people liked Laura. But, she made the mistake of publically humiliating Aladin on national TV over his “jiggy-jig” performance.

Fans didn’t like that she wasn’t respecting his culture. Plus, she became rather militant in attitude over changing the perceptions of women in the middle-east. Next, rumors of a split came out. And, later, Laura claimed she was pregnant. Aladin denied it. And, when that went down badly, Laura then claimed an ectopic pregnancy. Fans turned on her for lying, as did other cast members of 90 Day Fiance, like Deavan Clegg.

Evelin offers Laura a place of sanctuary in Ecuador, the backstory

After the Tell All, when Laura was humiliated on television by Aladin, she was really upset. He literally asked her for a divorce. Well, maybe she understands Aladin’s feelings about television humiliation now, some fans thought. Fans can recall that Evelin stuck up for Laura through a lot of hate. And she even got quite abusive in defense of the older woman on Instagram lives. But, TV Shows Ace reported that it all fell apart recently. Evelin just wants Laura out of her life.

Our report noted that Evelin grew uneasy with her 90 Day Fiance castmate. Talking to John Yates, she alleged among other things, that Laura’s not in a relationship with her ex-boyfriend, Raul. Plus, the so-called slipping in the sheets with @thechanteltea (Tony’s) a lie. Then, she mentioned that Laura’s trying to break up her and Corey who recently filmed a bit for 90 Day Fiance. Allegedly, Laura wanted Corey to become her roommate in Ecuador. And, Evelin dished a bit on rumors Laura’s in a love triangle with a man and Danielle Jbali.

Monsters and Critics also covered the story about Evelin’s live. They focussed on one thing about Laura, and that involved her not being paid by TLC. They wrote, “Laura did not get paid for her time on 90 Day Fiance: The Other Way because she broke her contract. From letting 90 Day Fiance fans know that she and Aladin were no longer together to the pregnancy and abuse claims, Laura went too far in terms of her NDA.”

So, now Laura upset her 90 Day Fiance pal, Evelin, she’s now in Ecuador and friendless in terms of cast-members. Maybe she hoped to win back some fans after Evelin’s disclosure. Actually, John Yates noted that Evelin didn’t tell half of what she could have. Fans liked that she never savaged the woman further. It showed a bit of class. But, Laura vowed revenge, saying in a Story, that she would tell her own “truth about Evelin soon.” And, she did that on Christmas Day.

Did Laura ruin things for Corey and Evelin with her revenge post?

Laura shared a few pics of Evelin with a guy on a beach. She claimed Corey knows Evelin cheats on him with this guy. But, he allows it. And, she showed a pic of Evelin’s ID showing that she apparently married Corey. Well, part of their TLC storyline is to keep fans guessing about their marriage status. Did she hope that by saying this, TLC would dump the only person who reached out a helping to a woman in need?

90 Day Fiance‘s Evelin must really regret the day she reached out as a friend to Laura Jallali. Do you think her reveal on Christmas Day will make Laura popular with old fans again? Sound off your thoughts in the comments below.

Remember to check backs with TV Shows Ace for more news and feedback about Laura and Evelin from TLC’s 90 Day Fiance.