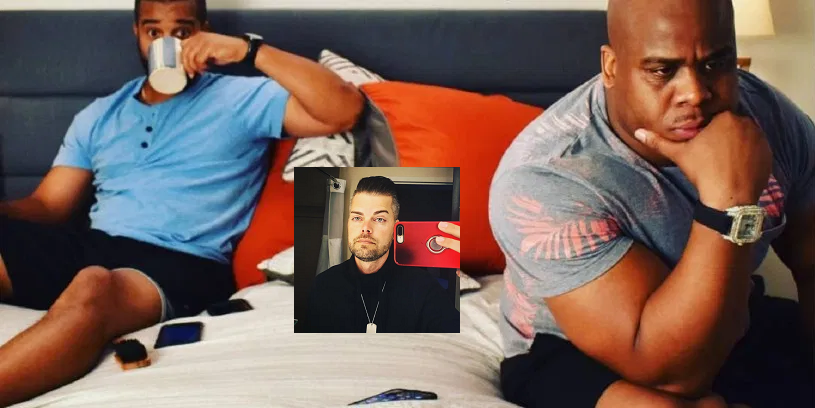 90 Day Fiance: Pillow Talk has its share of drama behind the scenes. Tarik and Dean have been noticeably absent for most of Season 2 of Pillow Talk. Of course, they’re not the only ones. A lot of the couples are shuffled around on the show. One of the most consistent couples on the show is Annie and David.

But there’s a good reason why Tarik and Dean haven’t been on Pillow Talk lately. A new report has revealed that the brothers have gotten the boot. As previously reported via TV Shows Ace, Dean Hashim made a joke about Tim Malcolm’s gender. On Sunday night, Dec. 22, Tim took the brothers’ place on the series.

Rumors swirled that Tarik and Dean have been fired from 90 Day Fiance: Pillow Talk. And it appears that Tarik confirmed the rumors on Instagram on Wednesday, Dec. 18. The TLC star spoke out about his disappearance on the spinoff series, according to a report via In Touch Weekly.

“When family lies on you, smiles in ya face but stabs you in the back, f*x up the bag, blocks you and your girl without warning, but on social media acts like y’all still kool so he won’t lose his IG following … Me and Hazel just be like Jeezy and Jeannie #youaintCainandIaintAbel #youallouttapocket #keepthatsameenergyinpublic #tellemwhatyoudid #timhadnothingtodowithitATALL,” Tarik captioned his Instagram post.

How the TLC feud started

It all started when Tarik and Dean appeared on an episode of The Domenick Nati Show earlier this year. During their interview, Dean cracked some jokes about Tim that didn’t bode well with the 90 Day Fiance star. Tim already has fans questioning about his gender and sexuality. Dean continued to stroke those rumors on the podcast.

Dean also speculated Tim’s gender identity. He accused the reality star of getting a sex change. However, Dean did apologize for his controversial comments on a follow-up episode of The Domenick Nati Show. He admits that he went “a little overboard with my jokes on Tim.”

That joke didn’t sit well with Tim. He took to Instagram to fight back at the 90 Day Fiance star.

“I’m gonna address something about Mr. f***ing Dean Hashim – Dean, shut the f*** up! I’m so sick of every f***ing day for the last couple of days I’ve gotten online and all I’ve seen is Dean Hashim running his mouth about Tim Malcolm,” he said in an Instagram post.

I’m getting tired of reading mr comedian run his mouth

“You know what, f*ckin’ Dean, here’s the truth. The powers that be — you know because you know what we have the same f*cking boss at the end of the day — called me when you ran your f*cking mouth and made transphobic comments. And I begged them not to fire your a**,” he said. “F*ck your goddamn stupid apology that you’re so butthurt about that I didn’t respond — I took the high f*cking road and didn’t respond to you.”

Dean defended himself in an Instagram video. He revealed that he reached out to the 90 Day Fiance star to apologize. He also said he has nothing against the gray, transgender, or LGBTQ community. He just doesn’t like Tim. Despite what Tarik previously said, Dean said that the 38-year-old entrepreneur isn’t the reason why he’s no longer on Pillow Talk.

In the comments section, Dean talked about his future on the show. He said that “one day maybe” he’ll make a comeback. According to Showbiz CheatSheet, Dean dropped big hints on Instagram that he could make a big return soon.

Domenick Nati also hinted that he could appear on 90 Day Fiance: The Other Way, but Dean hasn’t confirmed or denied that rumor. What are your thoughts on Tim Malcolm replacing Dean Hashim and Tarik Myers on 90 Day Fiance: Pillow Talk? Do you miss Tarik and Dean? Sound off below in the comments section.