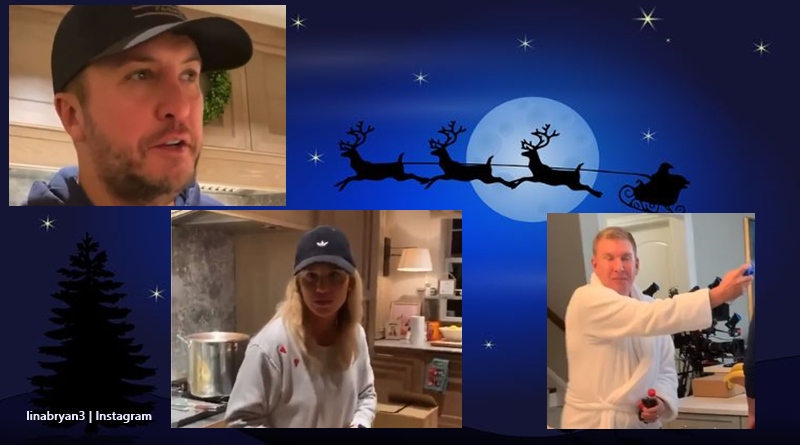 Todd Chrisley fans know that he simply loves pranks. Sometimes, he plays the same prank on the same person many times. And, he seemingly catches them out time after time. Chloe’s nanny, son Todd, and even Savannah don’t escape his funny side. And, now he joined wth Luke Bryan and Caroline as they did their 12 Days of Prankmas pranks ahead of Christmas.

The patriarch of Chrisley Knows Best, Todd often makes his fans smile. TV Shows Ace reported about how he pranked Chloe’s nanny over and over on one day. He promised he’d stop but couldn’t resist doing it again. We noted that on his Instagram, he shared numerous pics and vids from that day’s naughtiness.

We noted that in once scene, we saw “Todd in the garage lurking. Although he promised his fans the pranks were over, nope. Again, he yells and jumps out from behind the door. Poor Andrea nearly has a heart attack! And no, that’s not the end of Andrea’s prank day. So, maybe it’s a given that he instantly agreed to help out Luke Bryan and his wife Caroline with their 12 Days of Prankmas pranks.

Luke Bryan, Caroline and Todd team up for Christmas pranks

Luke Bryan’s strict on this year’s American Idol. We reported that he not gonna give people chances if they don’t deserve it. In one scene of the preview for 2020, we saw him say, much like Simon Cowell. “it’s a no from me.” But back home with his wife Caroline, he shows his funny and fun side to life. Caroline posted up on Instagram about their “Prankmas.” Popculture noted, “Luke Bryan and his wife Caroline are cranking up their pranks against family and friends and ensuring their gags are as memorable as the joys the holiday season brings everyone they love.”

Todd Chrisley appeared in one of them. There we see him catch his son, Chase out. Plus he pranks in the kitchen. Todd honked and got such a satisfying fright reaction. One fan said, “I will say Todd, you are a very brave man to try to scare the shit out of someone with a knife. Hope you all have so much fun! Merry Christmas! @linabryan3 Keep up the pranks! Love it!”  And, Savannah also suffered a prank from her dad. He certainly enjoyed being the prankster in those vids.

Day 10….The Air Show. The naughty little airhorn is back. @toddchrisley gets his hands on one and I have a fail when trying to airhorn Luke! Lastly, we have a random “horn” prank. #12daysofpranksmas

The Prankmas scenes don’t only show Todd Chrisley. We also see Luke and Caroline conniving a prank on their friends, Jimmy Butler and Meyers Leonard. The post on Instagram read, ” @jimmybutler @meyersleonard come over for an “organic” dinner! ” Well, Lkke expalined that “Jimmy’s on a no meat thing and Meyers on only turkey.” So they pranked about turkey for dinner. They got their pet turkey Juanita into a box. Stressing Juanita’s a pet, and no animals got harmed, they continued their prank. Like Todd Chrisley, they really do naughty in that scene. They plan on telling Meyers they’ll cook Juanita.

The video clips up on Instagram present loads of the pranks and fun by Luke and his family. What do you think about Todd Chrisley joining for this series of prank videos? Do you think he’s funny? Sound off your thoughts in the comments below.