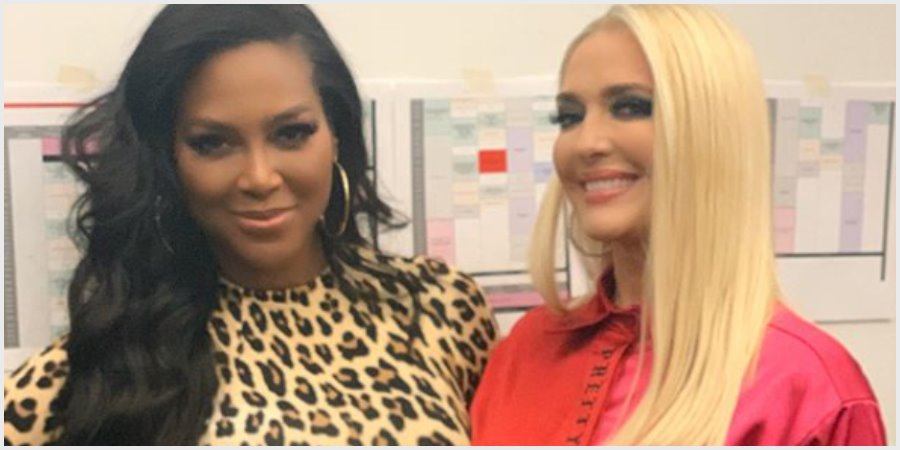 Kenya Moore and Marc Daly announced their separation in September. Moore said, “It is with profound sadness that I regret to inform my fans that I am divorcing my husband Marc Daly.” She went on to say her only concern moving forward would be their daughter, Brooklyn. Daly said something similar, he said, “I have come to the difficult decision to separate from Kenya at this time. Our daughter has two parents that love her very much and in her best interests, this situation should remain as private as possible.”

They’ve been co-parenting and had talked of possible reconciliation as recent as November. Moore said, “I didn’t get married to quit.” Now on the most recent episode of RHOA, she opened up a bit about why they didn’t sign a prenup. During a couple’s dinner with Kandi Burruss and Todd Tucker the conversation turned to the controversial topic.

What Did Kenya Moore Have To Say About A Prenup?

Kenya Moore said, “you know, Marc didn’t want a prenup. We don’t have one. Like, he wouldn’t even have the conversation.” This was in response to Kandi saying it was just insurance and it’s good to have. Daly explained the reason he was against it, “I’m not going to marry someone who has a prenup. If you’re with me, you’re all the way with me or you’re not with me.” He said he told her she could have everything, and he’d move forward and build it up again.

Kenya told them, “I started off my career in the entertainment industry. I was a corporation since I was 17 years old. I’m a self-made person. If you helped me build something, that’s different.” Mike Daly didn’t believe that was true and argued he helped her fix her hair care business. This didn’t sit well with Moore who said in a confessional, “Marc’s a dirty player. He’s the type of person who will grab dirt off the ground and throw it in your face.”

They Argued About Other Things As Well Throughout Dinner

Kenya Moore took offense again when Mike called her flashy, according to People. She said, “I don’t necessarily think I like flash. I’m a self-made person and I’m very proud of that factor.”

They went back to a conversation they had before the wedding where she wanted a Bentley. Daly told her they should take care of their priorities before getting a new car.

Kenya said, “but my house is paid for, so if I want to buy a car, it’s my money. If I want to buy a Bentley, so be it.” It gave fans a little insight into some of the arguments they’d had. Fans of RHOA will wait and see if the two can work it out.

‘Outdaughtered’ Danielle Busby Feels The Heat In More Way Than One
What Did Will Klein Do On His Birthday?
‘Life Below Zero: Next Generation’ Exclusive: Alex Javor’s Nail Biting Roof Repair In Ice
‘Married at First Sight’: Jacob Can’t Deal With ‘High-Strung’ Haley
‘MAFS’ Paige and Chris Persevere Through Pregnancy Drama