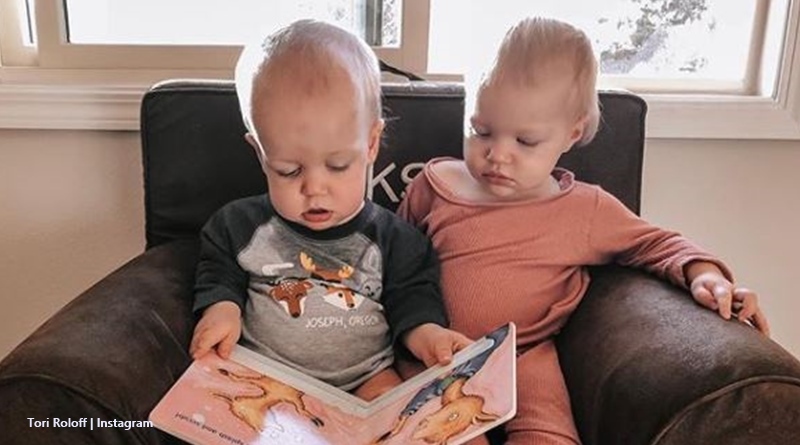 LPBW star, Tori Roloff’s, been busy photographing her kids. And, the other day she shared a Christmas card of the family in their Christmas pajamas. But, now she took another photo of just her with Jackson and baby, Lilah Ray. They look very sweet in matching plaid. But, many fans noticed the color of Jackson’s hair. They wonder if he’s going red as he gets older.

Tori Roloff fans often get spoiled with photos of Jackson. They can’t get enough of the cute little guy. And, this year’s special for Tori as she and Zach have Lilah in their lives for her first Christmas. Their new baby was featured in Tori’s Christmas photo. TV Shows Ace reported that the family sat in front of the Christmas tree wearing their matching “Christmas pajamas.” And, now she shared another matching picture with Lilah and Jackson wearing plaid.

Fans of LPBW mostly associate red or ginger hair with Audrey Roloff, Jackson’s aunt. And, we know that her husband, Jeremy, has dark hair like his brother Zach. Actually, he grew his hair long and fans hated it. But, Popculture reminds us Jeremy cut it all off “for charity.” But, now it looks like Jackson’s hair’s going red – actually redder than Audrey’s daughter, Ember. Ember’s got a lot of blonde in her hair with only a hint of strawberry. So, if his hair is turning red, where did Jackson get it from?

One has to wonder if the red came from Matt Roloff, the LPBW patriarch. But, we saw him gray-ish and gray since Season 1 of the show. When he grew out his beard for charity last year his beard came out dark. So, the red doesn’t seem to come from him. Zach, in the early seasons of the show, grew out dark. But, if you watch the old episodes, like in the video above, occasionally, there seems a mild tint of red to it. Tori’s early photos before she and Zach were married sometimes showed a tint of red in her hair, depending on how the sun caught it. And, blonde mom Amy, also sometimes shows a tint of strawberry in the right lighting. Maybe Jackson’s getting a bit of reddish color from all of them.

Tori’s Christmas photo and the one of the tartan-clad kids show Jackson’s coppery red hair. Tori captioned her post with, “This is what it’s all about… matching outfits and cheesing big. I love these two so much.” And, Jackson’s hair’s shown with that ginger-red color coming out. Fans immediately picked up on that. Many of them asked Tori if he’s turning red. But, unfortunately, she never replied to them.

It’s also possible Tori has edited the photos. As fans know, she’s a photographer. She might have edited the lighting and tones of the photo. Plus, Jeremy Roloff has created his own preset collection for editing photos. That’s why Ember’s hair sometimes looks red. The same thing could be happening to Jackson if Tori wants to support her brother-in-law’s business.

If you look at the two photos below, you can see that hair color.

What do you think? Is Jackson going red, or is it just the lighting? Maybe it’s a filter. Did he get it from Zach, Tori, Amy, Matt, or any of the other LPBW family? Sound off in the comments below.