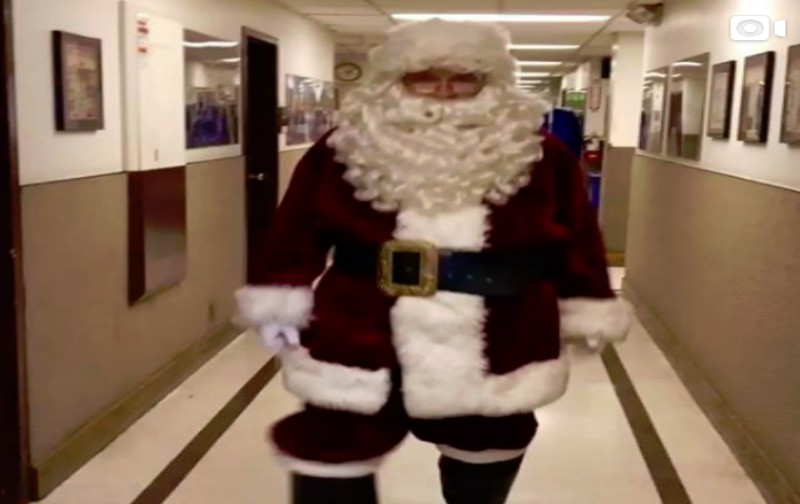 Days of Our Lives has a few holiday surprises in store for viewers this week. As the show moves into the new year, some stories will heat up while others wrap up.

Days of Our Lives’ Eve and Hattie Freed from Prison

Spoilers say that Eve will leave town, though she may return at some point. Now that Jack (Matthew Ashford) and Jennifer are reunited, there’s not much on canvas for Eve to do.

Before she leaves, she thanks Abby (Kate Mansi) for help in proving her innocence.

Hattie (Deidre Hall) is also released from prison with her new friend. Unlike Eve, who has no ties to Salem, Hattie decides to stay in town to be near Roman (Josh Taylor.)

Later in the week, Hattie makes a shocking discovery when she walks in on Stefano/Steve (Stephen Nichols) in Kate’s (Lauren Koslow) room.

Stevano Plays Santa at the Hospital

As fans know, Stefano (then-played by Joe Mascolo) has been obsessed with Marlena (Deidre Hall) for decades. Now in Steve’s body, Stefano can sneak around town undetected.

He steals Roman’s Santa suit and attends the hospital holiday party. Kayla (Mary Beth Evans) spots a familiar-looking Santa and follows him. However, Stevano manages to escape his ex-wife and drop a black onyx brooch into Marlena’s purse.

After the party, Marlena shows the brooch to John (Drake Hogestyn.) The two remember a premonition from Celeste (Beverly Todd) about Stefano returning to town.

JJ (Casey Moss) is not handling Haley’s (Thia Megia) death very well. During the one-year time jump, the paramedic turned to drugs to deal with the loss.

After his erratic behavior almost resulted in killing Kristen (Stacy Haiduk), JJ seeks help. He admits to Jack and Jennifer about his drug use and reveals that he is battling addiction.

The Horton family tree-trimming is a Days of Our Lives tradition. However, this year, Julie (Susan Seaforth Hayes) worries that no one will show up.

Luckily for Julie and for viewers, the Hortons come through and continue the traditional ornament hanging.

‘Below Deck’ Baby Boom? This ‘Sailing Yacht’ Star Is Also Pregnant!
Does ‘Seinfeld’ Have A Netflix Release Date Yet? When To Expect It
Disney Plus Drops ‘Luca’: Stream Or Skip? [Recap & Review]
‘Outdaughtered’ Uncle Dale Gets The Best Father’s Day Gift Ever
‘General Hospital’ Spoilers, June 21-25: Maxie and Brook Lynn’s Barrel Of Lies