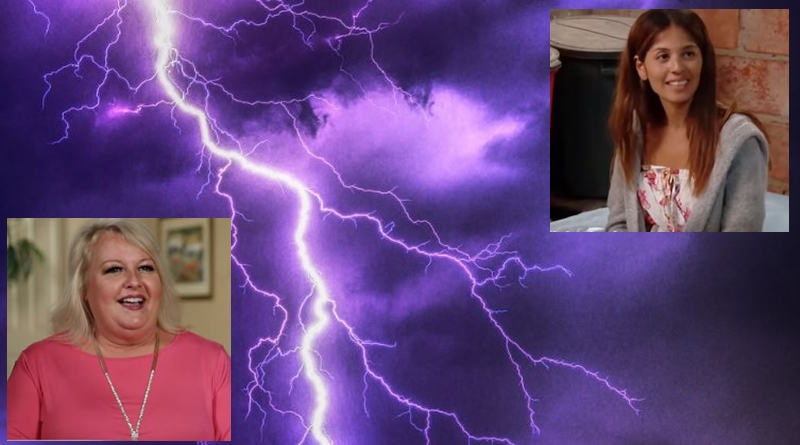 90 Day Fiance fans heard that Evelin Villegas and Laura fell out with each other. So, when show blogger and guru John Yates did a live interview with Evelin last week, he asked her about it. Many fans liked that while Evelin dished some issues about Laura, she also never really said as much as they suspect she could have. Naturally, Laura heard about the interview and now she threatened Evelin and called her “evil”.

Rumors of a bust-up between the two emerged after people noticed Evelin practically scrubbed Laura from her Instagram. TV Shows Ace reported that John Yates “weighed in with his views on it.” That came before the live interview which followed. Back then, he suggested, “Laura was being Laura and Evelin got tired of her sh*t, like everyone else in Laura’s life.” And, he described Laura as a “bridge-burner,” which actually sums it up very well. We saw her fall out with her son Liam, attack Aladin with various allegations, and of course, the big pregnancy lie came out.

Since then, fans think the 90 Day Fiance alum also lies about a relationship she’s in. Cheatsheet noted that she posted up several pics of Tony, the guy from @thechanteltea account. Her captions made it out that she and he are not only in a relationship but slip between the sheets for a good time. Many fans think that’s crazy as he apparently prefers men. That’s one thing that Evelin Villegas addressed in her live interview with John Yates. Well, when John said that Evelin was pretty much over Laura, it came out that indeed, she is.

Summary of the live interview about Laura

The live interview by the 90 Day Fiance star is embedded below. In summary, Evelin mentioned the following:

Apart from all of that, the 90 Day Fiance alum, Laura’s also apparently involved in love-triangle with Danielle Jbali and a guy she likes.

Laura strikes back, threatens Evelin and calls her ‘evil’

Fans of the show know that Laura knows how to turn on people. After she and Aladin broke up, she went all out for him with a wave of hatred on social media. And now, she’s enraged. John Yates shared a screenshot of a conversation where Laura described Evelin as “real evil.” She said, “the real truth will be coming out soon.” Well, some fans find that interesting, as Laura’s not got a reputation for being really honest.

Laura also said, “factual truth!…not gossip…anybody cans say bs but you neede actual evidence to back things up.” Okay – point taken, but where’s the evidence she had an ectopic pregnancy, some fans wonder? Then, Laura continued, saying, “[Evelin’s] day is coming very very soon about her real truth, her real story.” Well, it certainly looks like Laura’s on the war-path and out for Evelin now, probably even more than she was with Aladin. And that’s a pity, as Evelin was the one who reached out a helping hand after the ugly 90 Day Fiance Tell-All with her ex-husband.

John Yates followers respond to Laura and her threat against Evelin

On his post, John Yates’ followers reacted to Laura and the whole situation. Former cast member, Leida said, “Dear Laura, please stop with this LIARRRHEAAA of yours! It’s disgusting, annoying and concerning 😅.” Another person noted, “I honestly didn’t think there was anyone left on the planet that would support Laura…I was one of those people that supported her initially until her ‘pregnancy’…I have a lot of respect for Evelin at this point.”

Meanwhile, yet another 90 Day Fiance fan with strong views mentioned something similar that Deavan Clegg alluded to. They commented, “It’s all manufactured drama in an attempt to get back on tv.” And, it seems no matter what “truth” Laura trots out, people will be disinclined to believe it anyway. One person pointed out, “This women doesn’t know when to shut up! It’s like she’s asking for people to say how horrible a person she is. She has cried wolf to many times, so if there ever is some truth, no one will believe her. Smh (sic.)”

John Yates does not allow embeds from his Instagram. However, if you want to follow the conversation, it’s easy to find on Instagram search. You can use his handle, @johnyates327tv.

The drama that spiced things up for 90 Day Fiance fans

Most people on social media agree that the current season of 90 Day Fiance is mega-boring. After all, Tania not getting the shed ready for Syngin is not trending news. Really, how boring and ridiculous is Anna Campisi with the stupid translator app? And who can top Angela Deem when she allegedly assaulted Avery’s mom during the Tell All? So, while this new drama emerges, at least die-hard fans of the show get something new to talk about.

What do you think about Laura calling Evelin “evil” and threatening her? Do you think anyone will believe Laura’s truth after all the lies she told in the past? Sound off your thoughts in the comments below.