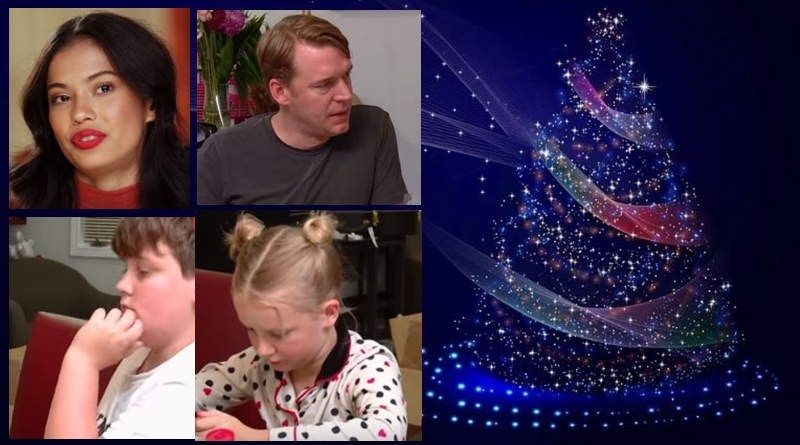 90 Day Fiance fans know that Michael Jessen and Juliana live in Greenwich, Connecticut. But, that’s not his home state, as it was revealed in a Christmas post that Juliana shared with her fans. They’re off to Indiana for Christmas with the kids. Recently, we saw on the TLC show, that Juliana cried about the prenuptial agreement. But, in real life, it looks like they moved on and all get along pretty well. Max and Cece, the kids, seem quite fond of Juliana as well. And, now they are all celebrating Christmas together.

90 Day Fiance, Maxwell sits in the backseat on the way to Indiana, days after dishing good advice

Just the other day, TV Shows Ace reported that Maxwell, Michael’s son gave some great advice which Michael shared on his Instagram. Someone asked Maxwell, “What advice do you have for a 28 year old. What would you tell your daughter?” Max said, “Well, I’ve never been 28, but I would say just be polite to people.” And, the fact that he’s not making a scene about sitting in the backseat probably related to his noticeable politeness in the 90 Day Fiance show.

Fans love that Max is sensible and mature for his age. Meanwhile, fans sometimes disagree with Juliana and Michael’s age difference. But, they universally congratulate Micheal on the way he and his ex raised their kids. Max even stepped up to explain to Juliana what the prenuptial agreement meant. ET reminds us that she was confused by all the legalities. And, she felt a bit unloved. Now, moving on, she smiled as they started off on their holiday.

Why choose Indiana for Juliana and Michael’s Christmas with the kids?

On Instagram, Juliana’s post was captioned with, “On the way to Indiana👯‍♂️✨🎄.” Tagging Maxwell, she added, “His face cause now I have the front seat🤣.” Some fans commented about that, both for and against. But, more of them asked why they are traveling to Indiana. In fact, 90 Day Fiance cast member Paul Staehle said if they got close to Kentucky, they should maybe meet up. Some fans hoped for a stopover in Ohio for a meet and greet.

One fan asked, “Is…your husband is from Evansville, IN? Because I saw his sky blue Evansville jersey from one episode of 90 Day fiancé.” Well, later on, Michael said that Evansville’s his original hometown. Juliana explained to another fan that Michael’s family is in Indiana. Over on his Instagram, the popular young star, Max, also shared about the road trip.

On the way to Indiana👯‍♂️✨🎄 His face cause now I have the front seat🤣 @maxwell.jessen @michael_jessen_77

Maxwell Jessen, popular with 90 Day Fiance fans, has garnered nearly 4k followers so far. He shared a photo of himself with his headphones on, sitting in the car. He captioned it with, “About to go on a big road trip.” There, another fan talked about Evansville. They commented, “I’ve loved a lot of folks from Evansville/New Albany. I’m from Canada and felt like home was there.” Many others wished them a happy holiday in Indiana.

About to go on a big road trip

What do you think about Juliana and Michael going to his home state, Indiana, for the Christmas holiday season? Did you know Indiana is Michael’s original home? Sound off your thoughts in the comments below.