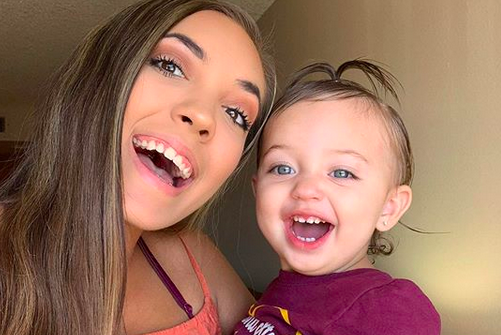 Unexpected star Chloe Mendoza is known for her rocky relationship with her mother and her difficult relationship with her boyfriend, Max. If you watched her season of the show, you will recall the ups and downs that the teen mom faced. Viewers agreed that it was difficult to watch everything that she was going through. Sometimes, they sided with Chloe, and other times, they sided with her mom.

Though she is not returning to the show, fans can keep up with both Chloe and Max via social media. Right now, she and Max have a good relationship. It’s unclear what’s going on between Chloe and her mom.

Now, Chloe has shared a new picture of her daughter, Ava. In her caption, she simply referred to Ava as her “baby”. The picture features Chloe holding Ava. They’re both smiling big. The mom and daughter pair seems to be doing well.

Chloe’s followers on Instagram love the new picture she shared. One fan said, “She is so freaking cute .” Another wrote, “You guys are adorable💗”. Another Unexpected viewer said, “SHES SO STINKIN CUTEEEE🤩🥺 like ahhhhhhhhh😭”.

The love continues throughout Chloe’s comment section. Fans can’t seem to get enough of Ava. They especially love her cute pigtails and jean jacket. They also noticed how big Ava has gotten. She’s definitely growing up quickly.

On Friday, Chloe also posted a couple of pictures of herself and Max. These were posted prior to the new photo she shared of herself and Ava. In the caption of the photos featuring Max, the Unexpected mom writes, “Ava was asleep.”

So, in the comments section of the photo of Chloe and Ava, a fan wrote, “Ava is awake.” Chloe responded and said, “okay I was gonna caption it this but then I backed out lmao”.

In the recent pictures featuring Max, fans noticed how good he looks. They think that he is looking a lot better now that he’s handling his addiction. He seems to be healthy. Plus, he and Chloe seem to be on good terms. Being less stressed out has to help.

What do you think of Chloe’s new picture of Ava? Do you follow Chloe and Max on Instagram to stay up to date? Leave a comment below.