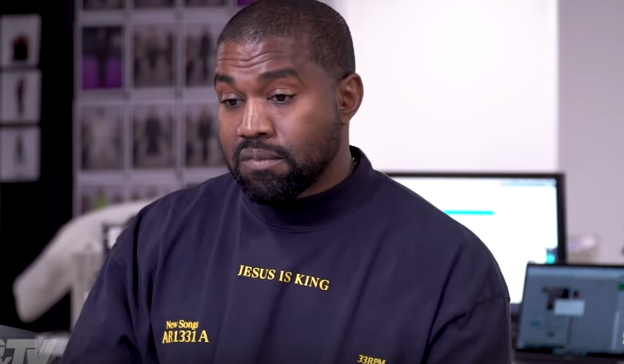 It’s almost like a shooting star! Kanye West showed off his smile at Saint’s 4th birthday party and it made it on Kim Kardashian‘s Instagram.

Only His Child Can Bring A Smile Like That

Kim shared an array of photos from Saint’s Jurassic Park themed birthday party. In a sweet shot, Kanye held Chicago as she held a toy and got a kiss from Kim. The grinning father looked off into the distance.

The Keeping Up With the Kardashians star shares daughter North and son Psalm with the rapper as well. She first shared the photos from the party on Tuesday, December 17th. The caption read, “Kanye and I threw Saint the coolest dinosaur party for his 4th birthday!!! He had so much fun!”

When Saint turned four on December 5th, Kim made him a special Instagram post. “I have no words to describe how much I love your smile and those curls of yours Saint!” The loving mother wrote. “You bring so much joy into my soul. You are so kind, loving and just so thoughtful and sweet! I am so happy today if your 4th birthday and We get to celebrate how much you’ve grown! Happy birthday my sweet sweet Sainty.” She continued to gush over her son, expressing how sweet he is and how it makes her melt.

Saint’s aunt, Khloe Kardashian didn’t share anything for her nephew’s birthday, but she did address this decision, says UsWeekly. She had also missed out on posting for Mason and Reign’s birthdays, her other nephews from sister Kourtney Kardashian.

Kardashians are known for sharing a post on birthdays to express their appreciation for them. Kim Kardashian made an individual post for each of the boys. For Mason, she thanked him for being the best big cousin to her kids, even if it’s annoying. For Reign, she praised him for his silliness and thanked him for being a best friend to her Saint. Grandma, Kris Jenner also shared a post with love. Khloe opted out of a post, but she did explain why.

“I have always found it bizarre that people get upset about birthday shout outs on social media.” Khloe tweeted on Saturday, December 14th. “My mentality is — Let people do what they want. Personally, I usually don’t post about my nieces and nephews on their birthdays because they’re not on social media. Happy Saturday.”

Her reasoning does make sense, and she wasn’t the only one who didn’t take part. Rob Kardashian, Kylie Jenner, and Kendall Jenner also didn’t make posts for the boys. Fans also had her back, and they agreed that she didn’t need to give them a shoutout.