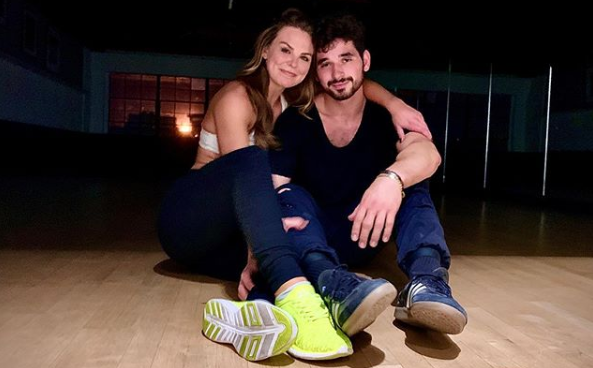 Who can blame Alan Bersten for being so interested in The Bachelor?

Alan Bersten’s Got All The Details, But His Lips Are Sealed

The pro dancer from Dancing With the Stars said he’s officially invested in Peter Weber‘s season, thanks to his former dance partner Hannah Brown. Some teasers for season 24 have shown that the former Bachelorette will make an appearance on night one. An intimate conversation between Brown and Weber has also been revealed, in which he asks her to rejoin the cast. As it turns out, Alan is in for the drama, he may even already have an inside scoop.

Alan explained that he and Hannah have gotten close during their time as dance partners. He’ll need to keep up and watch this journey to potential love. “I feel like I have to!” he said. Fans have loved the idea of Hannah and Alan being together since they first appeared on DWTS together. It’s been said that there’s been some pressure from their friends to take their friendship to the next level since they obviously have chemistry. But it seems Alan is happy for Hannah as she moves into the next chapter of her life.

Alan Bersten did confess that he didn’t know Hannah Brown before they became partners on the show. He had missed her season of The Bachelorette. “I’ve seen parts,” he said. “I have never really watched a lot of television, but now I feel like I have to because I’m so invested in it… I’ve heard it’s great.”

Where do I start? @hannahbrown words can’t describe the feelings I felt last night. WE DID IT. You never gave up, you always gave me more than I expected ( and I expected a lot) and you really allowed yourself to be vulnerable on that dance floor! You have inspired me Hannah, anything is possible, and I want to thank you for giving me the best season ever! I’m still shocked!!! What could be better than our scream before we dance? Wwwhhooooooo!!! #teamalanbamahannah forever!!! You are the best partner!

The Friends Will Have Plenty To Discuss On Tour

Once Alan gets caught up what’s been happening between Hannah and Peter, they’ll have plenty to talk about as they begin the Dancing With the Stars: Live! Tour 2020. Hannah will be taking the stage at Radio City Music Hall in New York City on January 28th. By this time, they’ll be deep into the new season of The Bachelor, which returns on January 6th. Hopefully, many of the fans’ questions will be answered at this point.

The season 28 winners of DWTS will be joined with other stars from the show, Lauren Alaina, Kel Mitchell, Kate Flannery, and Sailor Brinkley-Cook. Alan is so excited and can’t wait to share this experience with his partner. “It’s going to be awesome… It’s one of the most iconic shows we do,” he shared with Life & Style about their performance.

Alan Bersten expressed how lucky they’ve been to perform at the historic venue but being there with Hannah will be even more special. He recalled it as a milestone in his life, a big and amazing experience to share. It’s pretty obvious that he’s overjoyed by getting to share it with Hannah.