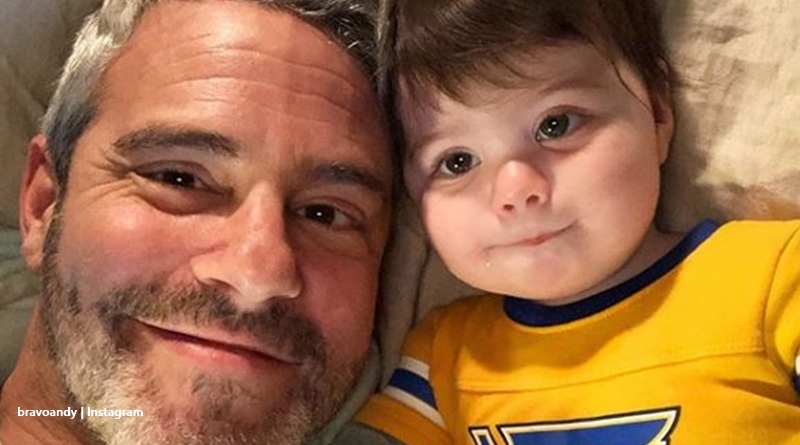 Andy Cohen of Bravo welcomed his son, Ben, by surrogate in early February. And, fans love that he shares plenty of videos and photos of his beloved child. The dark-haired little cutie-pie spends quality time with Andy, and these days, it seems Andy often rushes home just to enjoy time with him. Now, it looks like Andy may opt for a second child.

Whenever Andy shares anything about Ben, fans flock to comment on the cute little boy. Recently, TV Shows Ace reported he shared about Ben and the song he made up. At the time, Andy said Instagram, “Face Full of Feet” – new single coming soon…'” Fans loved the clip showing Ben lying on Andy’s lap and kicking at his face, as young ones so often do. Clearly, he loves being a dad. So, fans hope he might consider another child.

Andy’s a very busy man and spends plenty of time flying from one city to another. Sometimes, events like the recent Bravo Convention take days of coverage. But, he constantly makes the time whenever he can, to be with Ben. And, often, Ben flies with him. He told parents.com when Ben hit six-months-old, that he can’t take enough photos of his boy. “I definitely take pictures of him every single day. I would say between one to 10.” And, maybe one day, fans will see more pictures of a sibling for Ben.

A second child for Andy Cohen?

People reported that Andy talked about a second child with SiriusXM Radio’s Jeff Lewis Live. Andy said, “on Tuesday that he has ‘at least one embryo remaining.'” So, that means he could try and bring another child into the world. We don’t know who the surrogate mom was for Ben, but maybe the embryo’s from the same person. That would mean a new child would be a full sibling of baby Ben.

Andy said that he’s “considering” another child. But, he never specified which gender. A boy and a girl might sound like the perfect balance. But, Andy’s not into gender labeling as his fans well know. After all, Andy came out way before people considered it socially acceptable. Either way, a second child can expect loads of dad-time, if we go by Andy’s Instagram.

The most recent pic that Andy shared of Ben shows once again, the love this child gets from Andy. On Monday, he shared a pic of Ben on his lap grabbing at Andy’s glasses. The post was captioned with, “The glasses-grab-loop took us from dinner almost to tub time tonight!” Nearly a thousand loving comments came from fans, who no doubt will rejoice if we hear news of a second child on the way.

The glasses-grab-loop took us from dinner almost to tub time tonight!

What do you think about the busy celeb considering a second child? Would you like to see young Ben get a sibling? Sound off your thoughts in the comments below.

‘General Hospital’ Does Peter August Have An Evil Twin?
Netflix’s ‘Virgin River’ Season 4: What To Expect [Spoilers]
Chase Chrisley Shuts Down Todd, Gets Good Qualities From Julie
Fans Think Whitney Way Thore Got Rid Of Neeshi, What Happened?
‘Bachelor In Paradise’ Cast Evacuated Due To A Tropical Storm