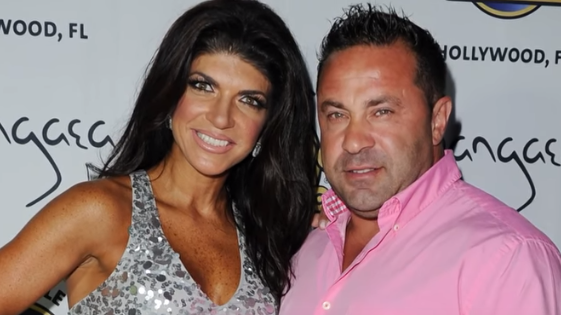 This brings the end of an era, Real Housewives stars speak about their thoughts on Teresa Giudice‘s split from Joe Giudice.

No Harsh Feelings From Joe Or Teresa

The couple has separated, but they do not have plans to divorce yet. Teresa and Joe discussed their future when she took their daughters to Italy to visit him. It was then that they decided separating would be their best option. It had been reported before that long-distance was not an option for them.

Joe is currently living back in Italy, waiting for the verdict of his final deportation appeal. Joe has been dating during this time, but Teresa has not. She’s been busy taking care of their daughters, Gia, 18, Gabriella, 15, Milania, 13, and Audriana, 10. She has also been at home taking care of her father.

The couple has no harsh feelings toward each other and they will continue to co-parent their daughters. The girls will be spending Christmas in Italy with Joe, but Teresa will stay at home with her dad.

The relationship between Joe and Teresa has seen many hardships in the past few years. The couple plead guilty to 41 counts of fraud, Teresa served 11 months in prison in 2015 and Joe served 41 months in 2016, after Teresa came home. He left prison in March 2019 and was released into the custody of Immigration and Customs Enforcement.

During the Season 9 RHONJ reunion, Teresa said that she wouldn’t stay with Joe if he was deported. She desires someone to be with her every day. She said she knows what will happen and that he will be with other women. So long-distance is not the lifestyle for her.

Joe spent several months in ICE custody before he was granted permission to live in Italy while waiting for the final decision of his case. Teresa did go visit Joe with their daughters in November, and she revealed that she has no plans to return until summer 2020.

Margaret Josephs said their split was not surprising to her. On Wednesday, December 18th, she shared on Watch What Happens Live With Andy Cohen, that they all heard what she had said at the last reunion. The decision they made is what’s best for their family and they are moving on. Margaret hasn’t had the chance to speak with Teresa since the news came out, but she plans to this week.

Thank you @affiniahotels for hosting me for #bravocon in NYC 🥰🏙❤️ I had such a fabulous stay! Can’t wait to come back! 👧🏼💋

Amber Marchese is not too concerned with Teresa and Joe, and she says she doesn’t care about people who don’t pay their taxes and commit crimes. She’s been fighting against the state forcing mandatory vaccinations on her children. “As much as I would love to try to care about housewife drama, it is not surprising the Giudices have succumbed to the curse of it. No one survives that show,” she said.

Siggy Flicker found the news to be sad, but most knew that the day would come. She said that this is a sad ending that had a beautiful beginning. The couple got married, had four daughters, and hoped for nothing but a bright future. Relationships aren’t easy, it takes work from both sides to make any relationship work. Siggy says the couple had too much working against them and she disagrees with the judge ruling in favor of Joe’s deportation. According to Siggy via UsWeekly, he did the crime, did the time, and deserved to go home. She concluded by wishing the best health and happiness to both Joe and Teresa and their daughters, they’ve all been through enough.

Danielle Staub says Teresa is a big girl and has made choices that she wants to stand by. Unfortunately, in these situations, the kids always lose out. She continued explaining that all parents make decisions and they always affect their kids. She feels bad for the kids, the family will remain in her prayers, Joe included.

Marty Caffrey was also concerned for their daughters. There’s not much he can say other than it’s a sad situation for their daughters. The pair are the only ones who can decide how to move forward in their relationship. He also said that the separation comes as no surprise. Since the two have been serving time over the last few years, they basically already been separated. Marty concluded by wishing the couple happiness.