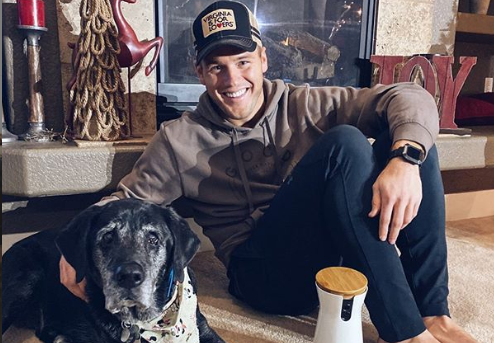 Colton Underwood had his struggles with depression and anxiety, like many others. He found his comfort and relief to come from his dog.

The former Bachelor shared an Instagram post on Wednesday of him and his dog, Sniper. He opened up about how Sniper helped him through tough times.

“These smiles say it all,” he wrote. “This dude doesn’t know how much he has helped me in his 14 years of life (103 in dog years) – through depression, anxiety and stressful situations having Sniper by my side has been the best remedy I could have ever hoped for.”

The former reality star concluded the post with, “Love you buddy. I can’t wait to see what this next year has in store for us. My best friend.”

Season 23 Bachelor winner and Colton Underwood’s girlfriend, Cassie Randolph, commented with love. “Gah,” she said with a heart emoji, a crying emoji, and a dog emoji.

These smiles say it all. This dude doesn’t know how much he has helped me in his 14 years of life (103 in dog years) – through depression, anxiety and stressful situations having Sniper by my side has been the best remedy I could have ever hoped for. Love you buddy, can’t wait to see what this next year has in store for us♥️🐾 my best friend

Cassie Randolph Addresses The Rumors About Their Relationship

“I remember posting this photo right after the finale & how excited we were to no longer be in hiding,” she captioned the post. “I have also posted something I wrote addressing some rumors and an article that came out this week. A lot of you have been messaging me about it. Warning, it’s pretty long (actually I probably could have written even more, since it’s hard to put the perfect words to your feelings).”

Despite some rumors circulating, she explained that they’re in a “good place” and are “very happy.”

According to People, Colton Underwood said they felt pressure from the public to rush into things after the show.

Underwood said that both of their families have been affected. So, they took the time to get ahead of the drama, they established where they were and decided that’s where they wanted to stay. They didn’t want to just go along with what the franchise expects, as well as the media and fans.

According to Colton, he couldn’t be any happier than where he and Cassie are right now. They’re still dating and focusing on getting to know each other, falling in love with each other more with each day. The more distance there is between them and the show, the more realistic their lives are feeling again.

Don’t miss catching Peter Weber as The Bachelor when it returns in January of 2020.