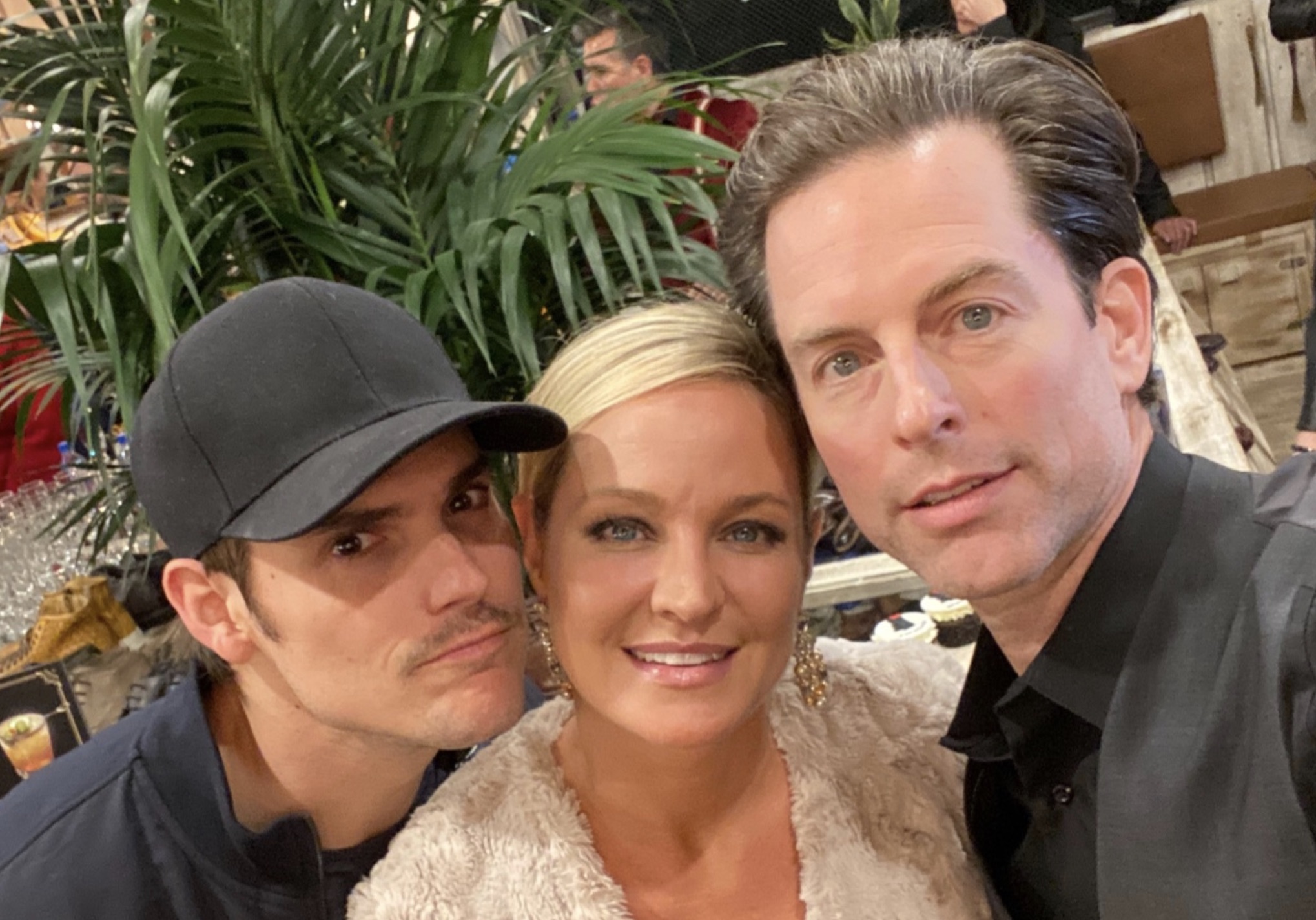 On Tuesday night, former Y&R star Michael Muhney posted a photo from a party. Sandwiched between the current Adam Newman, Mark Grossman, and the very beloved Adam from the early part of the 2010s, Michael Muhney is Sharon Case. Muhney hysterically hashtagged this photo #Shadamadam. What were the three Young and the Restless stars of past and present doing together?

Why was there a double dose of Adam Newman posted on Twitter on Tuesday night? We can thank Bold and The Beautiful star, Katherine Kelly Lang for this Shadam reunion. Lang, along with her husband Dom Zoida, who just so happens to be her business partner, opened up an exclusive Benheart store in Beverly Hills on Tuesday.

The couple are partnered with designer Hicham Ben’Mbarek, better known as “Ben,” to open his first store in the United States. Benheart is an altruistic brand. The story goes that the Moroccan-born designer went to Italy as a child. He fell in love with designing leather. Ben now designs 100 percent Italian made leather goods that are spectacular. He uses colors and textures that are breathtaking and unique.

According to his website, Ben nearly died a decade ago, when playing sports. He was diagnosed with a serious illness and needed a new heart. Now, he is active in organizations related to heart and organ transplants and children’s organizations.

Altruistic brands are now in vogue. Buying beautifully crafted items from companies that give back is something that celebrities support. So, it seems fitting that the grand opening of Benheart in Beverly Hills was a star-studded grand opening.

Based on Michael Muhney’s photos, it was quite a party. There were ginormous chocolate cupcakes with “Benheart” written in frosting. There were numerous bottles of champagne on ice, with an empty flute in front of the #Shadamadam trio. Most of all, there were beautiful people everywhere.

So, what were the past and present Y&R stars doing?

Sounds like Mark Grossman, Sharon Case and Michael Muhney were just hanging. We don’t know if they planned to get together, or if they ran into each other. Nonetheless, it looks like they found the whole experience rather funny.

Case and Grossman have become instant friends since he became the latest Adam Newman earlier this year. As for Muhney and Case, she has been a loyal friend to the former Young and the Restless Adam Newman. It is very likely that they planned on meeting up.

Last year, TV Shows Ace even reported how Sharon Case joined Michael Muhney and his wife Jaime, for some singing. They all sang Fleetwood Mac’s “Don’t Stop.” Fans hoped it would mean that Muhney would return to the CBS show, but they brought in Mark Grossman instead.

Clearly Muhney doesn’t have any hard feelings about this clearly unusual situation. He and his fans wanted him to return to his role as Adam Newman, and Mark Grossman got the role. It seems that Muhney has moved on. His recent confession that he contemplated suicide is totally in the past. Instead, he looked at ease and having fun. In fact, he was quite playful. When he tweeted the photos of the trio, he wrote “Wuuut?” Then,  #Shadamadam and tagged the other two actors. This double Adam was way too funny!

As for Grossman, he replied: “Good times tonight!”

Currently, Michael Muhney is starring in Sidepiece, a movie short that is making the film festival rounds. You can see Mark Grossman and Sharon Case in the Young and The Restless. It airs weekdays on CBS.