TLC’s Unexpected is the newest reality show to take on teenage pregnancy since MTV hits 16 and Pregnant and Teen Mom. Each of these hits made stars out of Leah Messer, Kailyn Lowry, and Amber Portwood. Season 1 shared the journey of teens Lilly, McKayla, and Lexus as they juggled school, relationships, and the impact of pregnancy on their already complicated home lives.

Is The Unexpected Cast On OutDaughtered Level, Or More Like 90 Day Fiance Level?

Shows like Unexpected and Teen Mom often come under fire for glamorizing their difficult lives. But considering the improvement over the last decade, some participants have more to gain than lose by taking part. Financially speaking, Messer and Lowry have only gained from the show.

In August, Season 3 kicked off with McKayla returning but alongside a handful of new couples. Many fans were upset about this and they were quite vocal about it. But, as the show is growing more and more, the cast’s pay is also increasing, right?

It’s not easy to know exactly how much they’re earning, the Unexpected cast’s salaries are not publicly available. A reported run-through of what various TLC stars make gives a good estimate. Their pay could range from $1,000 an episode, much like 90 Day Fiance, to tens of thousands, like the Busbys on OutDaughtered. But it’s important to note, the show is still fairly new, so trying to make this estimate is difficult.

McKayla Is Struggling To Make Money, She Says She Might Have To Get Another Job 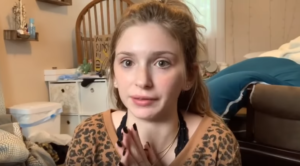 According to The List, a recent update from McKayla suggested the show isn’t a financial goldmine. She posted an emotional YouTube video in September, in which the Unexpected star revealed she was depressed and medicated. “I don’t have time for literally anything. I go to school, I come home, I study. I’m probably going to have to drop out and get a job, and then go back to college when my kids are older and can understand why mommy’s not around,” she explained.

McKayla even advised, “I might not be in college for much longer for the simple fact that right now I’m not really making any money because I don’t have time for YouTube. As most of you guys know, YouTube is my job. And I just don’t have time for it anymore.” Without consistently putting out videos, it’s getting harder for McKayla to take care of things. “I need a job, whether it’s YouTube, whether it’s actually going out and getting a job.”