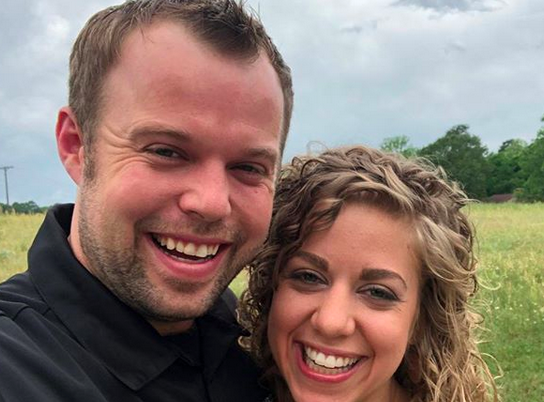 John-David and Abbie Duggar of TLC’s Counting On are expecting their first baby! On June 26, 2018, the two officially started courted. Then, they were engaged on July 17, 2018. They tied the knot on November 3, 2018. Then, in August 2019, they revealed that they have a baby on the way. The two share an Instagram account and post life updates and other photos there.

To announce their pregnancy, they wrote, “We are on Cloud 9 about welcoming our own little Duggar into the world!!! It really is amazing to think about being parents and having our own child to raise. We are thankful that God has blessed us with this new life and we look forward to taking on this new adventure!”

They included a photo of themselves holding a onesie that reads, “Baby Passenger on Board.” Shortly after announcing the pregnancy, they found out the baby’s gender. They’re having a baby girl! There’s currently a Duggar baby boom, and all of the babies born have been girls. John and Abbie are the last expectant Duggars right now, but another announcement could be right around the corner.

On Wednesday, John and Abbie shared their recent maternity photo shoot. They wrote, “Thanks to @maggie.ruth.photography for capturing these special pictures for us as we anticipate getting to meet our baby girl very soon!” They also added that Abbie is 36 weeks along. Their baby girl should arrive in mid-January.

In the post they shared, they included five pictures from the photo shoot. Abbie is wearing a pink dress and looks very happy. She and John are both excited to have this baby. Even though her pregnancy has not been easy, they were able to get these special pictures taken.

Thanks to @maggie.ruth.photography for capturing these special pictures for us as we anticipate getting to meet our baby girl very soon! 💜#maggieruthphotography #36weeks

Duggar fans love to see updates from John and Abbie. John and Abbie are a fan-favorite couple. Of course, they received lots of loving and supportive comments when they shared these new pictures. Fans are excited for the baby to arrive in just a few more weeks.

The photographer also shared one of the pictures via her social media account. As it turns out, the photographer is one of Abbie’s sisters. She wrote, “So much cuteness!!! I can’t wait to meet my niece!! 🥰” Abbie is one of eight children. Her family isn’t quite as big as John’s, but she still knows what it’s like to be a part of a big family.

So much cuteness!!! I can’t wait to meet my niece!! 🥰 @johnandabbie #maggieruthphotography #family #nikon

What do you think of the maternity pictures? Are you excited for more news about John and Abbie and their growing family? Leave a comment below.

The season finale of Counting On aired Tuesday night. To watch the episode, head to TLC‘s website or the TLC Go app.