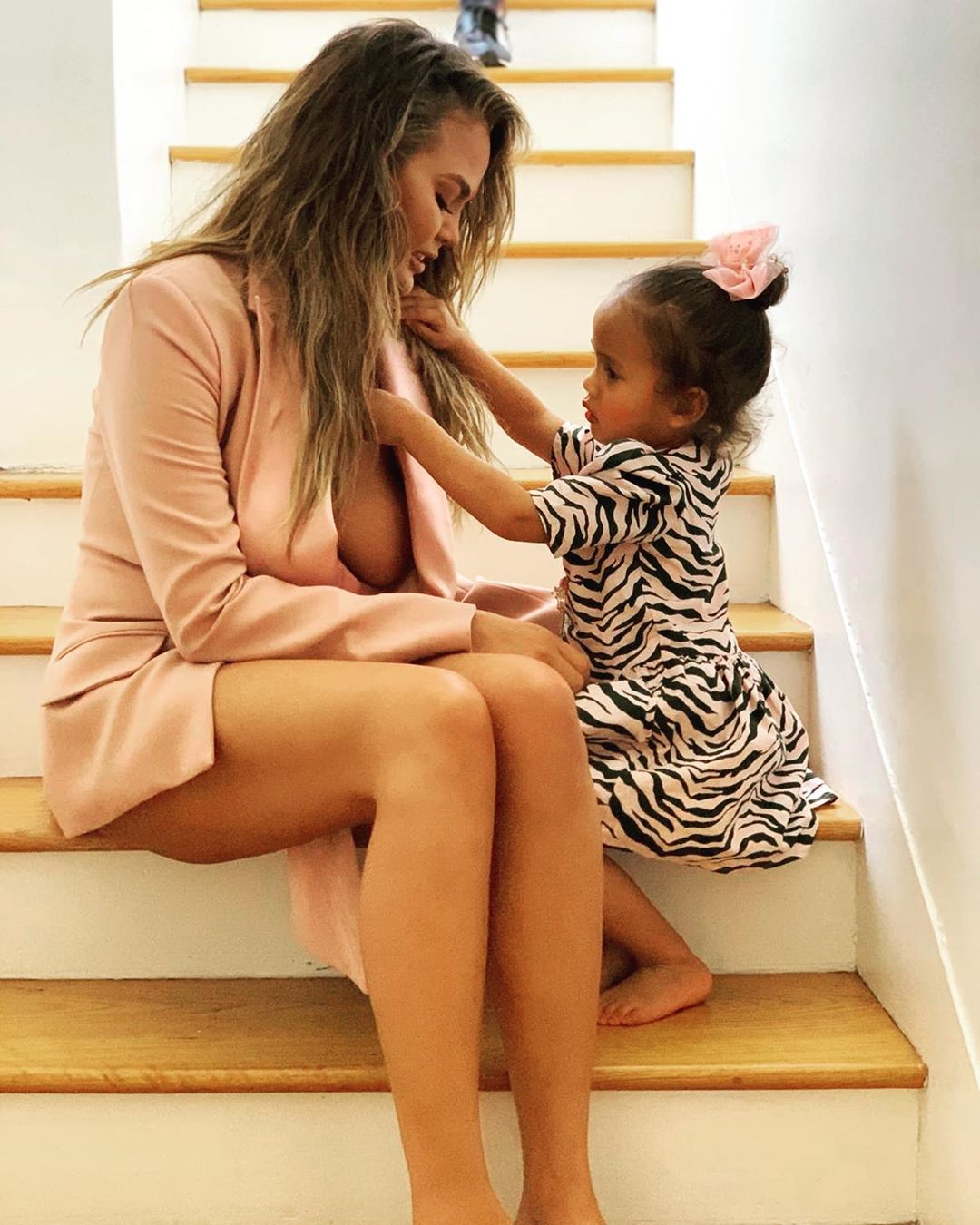 The model busted into a hilarious tirade about her husband on Tuesday night. She had just learned that Legend had invited the coaches and contestants of The Voice over to their home for dinner, without Teigen knowing.

Teigen vented to her Twitter followers that Legend informed her of these plans during the season finale of the competition.

“I didn’t know tonight was the voice finale. John invited everyone to dinner at the house after and I’m really f—ing mad because I didn’t make a f—ing FINALE meal. I would have gotten a cake or something too?? Who the f— does this? U don’t win the voice then eat short ribs.” She said in her tweet, explaining she had already made a small dinner.

Teigen made another tweet about John’s nonchalant attitude about the situation. She said it was “VERY John,” continuing by telling fans that the fun things are her ballpark. She went on to explain that he has no idea what kind of planning it would take to hosts the celebrity guests in their home. Blake Shelton, Gwen Stefani, and Kelly Clarkson are the judges on the show that would be joining them.

Chrissy Teigen Stopped The Haters Before They Even Showed Up

It seemed Chrissy could predict how readers would react to the issue, so she went ahead and told them off before they could. “If u think this is stupid go ahead and tell me what you made when Blake, Kelly, and Gwen came over to your house.”

She said if she had known people were coming over, she would have hired a whole ice cream truck to celebrate.

She also shared a screenshot of the WhatsApp conversation with Legend, she captioned it “Lol I’m serious I’m laughing but I’m serious.” With a little bit more colorful vocabulary.

In the texts, Chrissy Teigen asked John Legend why he didn’t plan something for the finale. His response was that the guests were not expecting something extravagant. But Chrissy wasn’t having it, she said that no one is going to want to just sit and have dinner. She finished the conversation with “That’s why you aren’t good at anything.”

Teigen was also concerned about her attire, she said she was not dressed to receive guests. She wrote on Twitter, “if they show up in their show clothes I will absolutely die in my robe.”

She continued to express her concern about how unprepared she was to help celebrate the victory of whoever won. Someone commented on Twitter that she may have spoiled the results of the finale. But she wrote back, “no if they’re all coming that means the winner is coming. I hope it’s john ONLY because I have no cake and anyone else would deserve cake. I hate him.”

She added, “I don’t understand why everyone thinks I spoiled it. Everyone is coming to dinner and I don’t know the winner!”

Jake Hoot became the crowned winner of season 17 of The Voice, he became known for his country sound. Even he felt shocked to be the winner, he told reporters backstage, “I didn’t think it was real. If I can say anything, it’s stop doubting yourself. Get out of your comfort zone. Get out there and take a chance and there’s no telling what you can do.”

Earlier this year, season 16 winner, Maelyn Jarmon revealed that she had been invited to John Legend’s home after helping him earn his first win.

“We’re in talks right now trying to solidify a plan to make that happen which is just crazy,” she said at the time. “I can’t believe it! I finally get to meet Chrissy and the babies. After all this time!”

According to People, it’s not clear if this invitation was extended to this season’s winner, but John did reply to his wife on Twitter. He apologized for inconveniencing her with the situation.

“I’m working on a solution,” he tweeted. “I’m sorry for stressing you out!”

Chrissy replied and added some information for her followers. “thanks for working on it at 8pm but like everything in your life, it’s been handled. By the way, his solution was ‘let’s order ice cream.’” 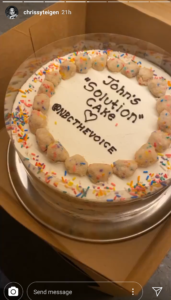 Crisis Averted, Thanks To Food Delivery

Teigen shared on her Instagram Story that she ordered a bunch of last-minute treats from Milk Bar in Los Angeles. Legend also got a cake from the same bakery.

In a video she shared, she said: “This is our life in a nutshell.” as she revealed a cake with “John’s ‘Solution’ Cake” written on it. Next to it were boxes of baked goods that Teigen had ordered. “John ordered this cake, and yet I ordered these that already came 10 minutes before his stuff.”

John chimed in, “With no writing!” Teigen messed up the frosting on his cake as a joke. “Your cakes have no writing!”

Teigen posted the clip on Twitter, captioning them: “omfg I ordered like 5 milk bar cakes before john’s one cake got here from the SAME place and he thinks he is some hero.”

All’s well and ends well. Legend shared a picture later of the whole gang, the caption reading: “We had a dinner party. There was cake! Merry Christmas and happy Voice finale to all!”