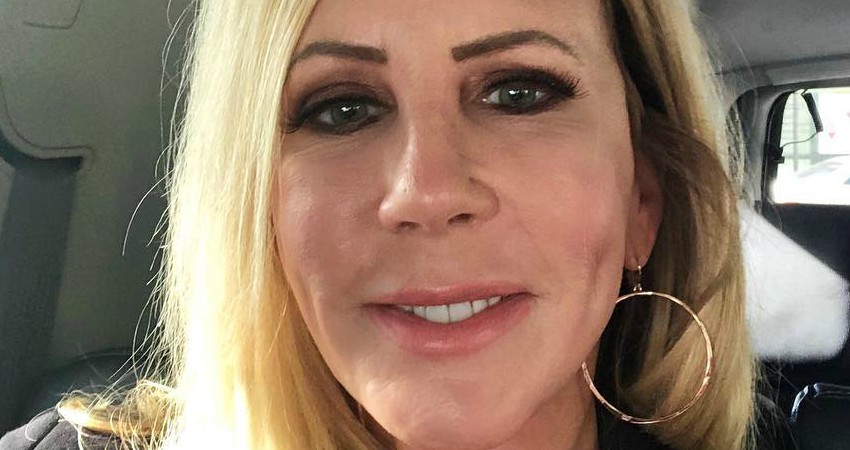 2020 is looking up for The Real Housewives of Orange County star Vicki Gunvalson. The OG of the OC is eyeing a wedding next year to her fiancé Steve Lodge. The Season 14 finale airing Tuesday, December 17, features Vicki’s engagement party hosted by co-star Tamra Judge.

Christmas came early after a judge made a ruling in Vicki’s favor regarding a lawsuit pending against her. As TV Shows Ace reported, an 82-year-old former client of Vicki is suing her for breach of contract, among other things.

Joan Lile’s claim is that Vicki knowingly deceived her regarding the benefits covered by her husband’s life insurance policy. The client and her husband, Robert Lile, purchased a policy from Vicki and her Coto Insurance Agency Joan claims Vicki didn’t honor.

Joan’s side of the story is that when Robert died, Vicki refused to honor the “Lifetime Waiver of All Premiums for a Surviving Spouse” provision the couple specifically paid for. Joan filed a breach of contract and fraud lawsuit in response.

The Blast reports that the lawsuit was originally filed in January of 2019. However, the case hasn’t seen any movement in the courts since August. As a result of the slow pace, a judge set a firm court date. In March of 2020, the judge will dismiss the case if the plaintiff doesn’t appear in court and explain the delay.

A judge ruling in her favor would be a win for Vicki. The reality star recently filed and then quickly dismissed a lawsuit against Bravo and RHOC co-star Kelly Dodd. Rumors speculated that Vicki would only be allowed to attend the reunion if she dropped the suit.

The Real Housewives of Orange County reunion begins Wednesday, December 18 on Bravo. The network will air the reunion in three separate episodes. The teaser shows a lot of drama… and a lot of swearing.

Vicki repeatedly refers to the original franchise as “MY show” before storming off stage. When she sees a cameraman recording her in the dressing room, she tells them to “f*ck off.”

Your first look at the Season 14 #RHOCReunion!🍊 #RHOC

Viewers will have to tune in to the reunion to find out if Vicki can be coaxed back onstage.

She revealed at BravoCon last month that she won’t return for another season unless she’s full-time. As fans know, Vicki was demoted to “Friend of the Housewives” between seasons 13 and 14.

Erin Krakow Hints ‘When Calls The Heart’ Season 9 Premiere Date
Netflix Movie ‘Heart Of Stone’ With Gal Gadot: What We Know
Sassy Savannah Chrisley Urges Fans: Get Ready For An Experience!
Why Does Pieper James Followers Remain High? One TikTok May Explain
Khloe Kardashian, Not Good Enough To Get Invited To The Met