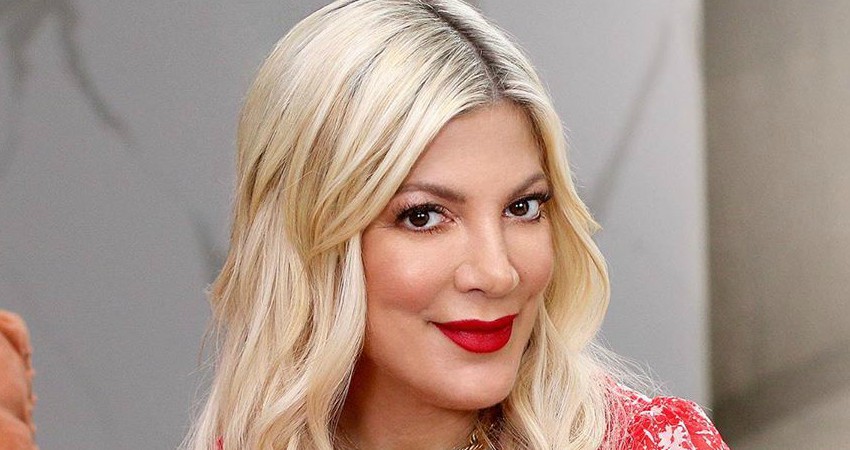 Lisa Vanderpump left The Real Housewives of Beverly Hills with an open spot earlier this year. Rumors began immediately over who could hold the diamond and fill Lisa’s pink shoes. A BH90210 star was rumored to be interested.

Former star Brandi Glanville threw her hat in the ring, as did Camille Grammer. Both have guest appearances on the upcoming Season 10.

During an August interview with Jenny McCarthy on her Sirius XM radio show, Tori Spelling said that she would be a good fit for the show. The former Beverly Hills 90210 star is no stranger to fame, fortune and Beverly Hills.

Tori’s 90210 co-star and bestie, Jennie Garth, appeared alongside her during the radio interview. The duo were promoting the ill-fated BH90210 reboot. Jennie revealed that she was once approached by Bravo to join the RHOBH cast.

However, the blonde bombshell turned them down. She jokingly told Jenny McCarthy that she wasn’t “desperate” enough.

TV Shows Ace recently reported that Tori was considering reaching out to Andy Cohen about joining RHOBH. According to insiders, the network wasn’t sure Tori was right for the show because of her money woes.

Now Tori is addressing those rumors.

People magazine asked Tori about the rumors over the weekend when she took her children to Disney on Ice. Tori admitted to being a huge fan of the show, but doesn’t think she would fit in.

“It’s one of my favorite shows, but not to be on, just to watch. As a viewer like everyone else. I am too nice and a people pleaser to get in those fights they get into.”

The actress starred in several reality shows on her own and with her husband. However, she told People that she never planned to address the rumors but the topic kept coming up.

Interestingly, RHOBH’s Denise Richards had a guest appearance on the BH90210 reboot. It was a nod to the original, which gave her one of her first acting jobs. Reports say Denise is at the center of the drama on this season of The Real Housewives of Beverly Hills.

Tori’s Instagram is full of nostalgic photos of her younger years. She recently posted a throwback photo from the time she was playing Donna Martin on the original Beverly Hills 90210.

The long caption reveals a struggle with insecurity while playing a beautiful, popular high school girl on the show.

“I was a young really insecure teenager that never thought I was good enough. Yet, I was on a hugely successful tv show playing a beautiful popular teen that had it all together. A character that girls everywhere looked up too and boys adored. Off camera I didn’t feel at all beautiful or good about myself.”

Fake it till you make it… – I was a young really insecure teenager that never thought I was good enough. Yet, I was on a hugely successful tv show playing a beautiful popular teen that had it all together. A character that girls everywhere looked up too and boys adored. Off camera I didn’t feel at all beautiful or good about myself. – But, in this pic I was ALL IN for the camera! “ Playing ” Donna Martin would be model 😂Goes to show that perception is not always reality. – Now, I look back at that young insecure girl and I give her HUGE props. She stepped up and went for it. I wish I could have off camera hugged her and told her she was good enough and was beautiful just the way she was. Life is hard enough for teens living up to the expectations the world, society, and peers put on us… let alone being on camera weekly in front of millions. Don’t get me wrong… one of the best times of my life!So blessed and grateful for the successful tv series I got to be a part of and will always cherish the #90210 cast that became my family and friends and relationships that would continue for a lifetime. I just wish I wouldn’t have been so hard on myself. Let myself “off camera” be the girl I felt I was “on camera”. – Bc of Donna Martin I tell my girls everyday they are good enough, smart, beautiful, and can be anyone they want to be. But never be who everyone expects you to be! Be you. #donnamartingraduates #beverlyhills90210 #bh90210 #tbt

Tori Answers Questions about Money on Tori Tried and True

The former Masked Singer contestant recently debuted her new web series, Tori Tried and True. In one of the first episodes, Tori answered fans’ assumptions of her. And boy, did they have a lot.

People reports that the topic of Tori’s finances came up. The child actress revealed that she’s never managed her own money and that’s why she’s terrible at it. However, she plans to teach her children how to manage money when they are a little older.

“And because I’ve never been good with money, I wasn’t ever taught to deal with money properly, that’s something that’s really important for me to do as I’m learning myself now in my 40s,” she continues. “I really want my kids to know that before they move out on their own.”

Tori and husband Dean McDermott have five children together, ranging from 12-years-old to two-years old.

Season 10 of The Real Housewives of Beverly Hills returns to Bravo in 2020. New episodes of Tori Tried and True airs on Tori’s Instagram, Youtube and Facebook Watch on Fridays.