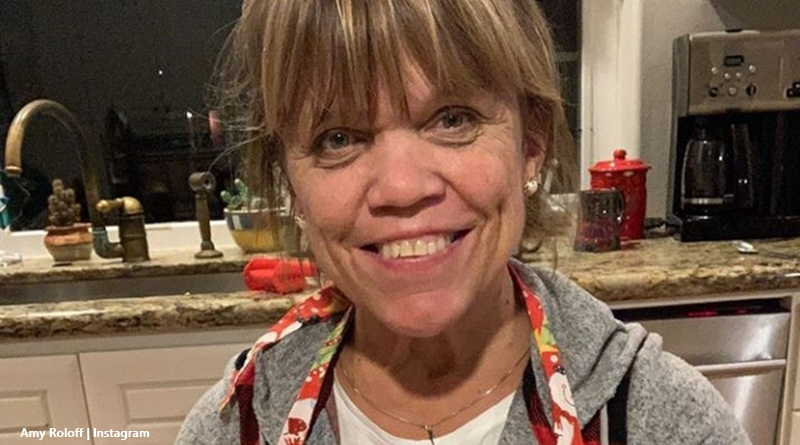 LPBW star Amy Roloff makes, sells, and ships her seasonal fudge from her Little Kitchen every year. Popular, it comes in attractive packaging and there’s usually a run on it at Easter, fall, spring and during the festive season. Now, she’s expanding her TV experience with her fudge.

TV Shows Ace reported that “demand’s quite high for her seasonal fudge. This fall, she brought out some tasty-sounding products. Amy announced them on her Instagram. She wrote, ‘Back in stock! 🚨 Amy’s Fall Fudge Trio. Grab these three delicious flavors:🎃 Pumpkin Pie 🥃 Hot Buttered Rum &🍫 Dark Chocolate before they’re gone again!’”

Well, fans know that the history behind Amy’s Little Kitchen. It gave the LPBW mom some comfort to cook and potter around the kitchen during the and after the dark days of her divorce from Matt Roloff. The website notes that Amy loves cooking and that the first book she ever wrote was a recipe book. Now, Amy’s expanding on her television experiences by appearing on another show.

Learn how to make fudge with Amy

Amy Roloff took to her Instagram this weekend to make an exciting announcement. She shared a picture of her cooking. The caption read, “Big news! Guess who’s going to be on @moregdo this Tuesday 12/17?! ME! I’ll be joining host @mollyriehl and we’ll be making my cherry cordial fudge on her In My Kitchen segment. 🍒🍫🥣.” She added, “If you’re local, you can tune in on @fox12oregon starting at 9AM and if you’re not local, we will share a link where you can watch after it airs. Are you ready to cook with me?! Tune in!!”

Well, @moredgo is the More Good Day Oregon show. They often feature local cooking and celebs. So many of the LPBW fans don’t live in Oregon and can’t watch, so they’re grateful for the promised upcoming link. But, some fans wonder why she doesn’t just do her own podcasts on cooking. Meanwhile, one grateful fan said, “I need this my mom always did the Fudge and I lost her a few years ago.” Another noted, “Something tells me your gonna have your own cooking show soon 👍👏🌹.”

Could we see Amy on her own show? Fans hope so

With Amy engaged to Chris Marek now and moving off the farm, some fans wonder if she’ll also leave the Little People, Big World show on TLC. We all saw the tension between her and Matt last season when he urged her on a buyout decision. Those fans who love Amy felt bitter on her behalf.  On her post, one fan said, “Amy expand, expand your territory promotion. Blessings 2020🥰.” Perhaps one day, those fans who enjoy cooking and who love Amy might see her doing her very own cooking show. Probably, loads of LPBW fans would follow her there.

Big news! Guess who's going to be on @moregdo this Tuesday 12/17?! ME! I'll be joining host @mollyriehl and we'll be making my cherry cordial fudge on her In My Kitchen segment. 🍒🍫🥣 🥣 If you're local, you can tune in on @fox12oregon starting at 9AM and if you're not local, we will share a link where you can watch after it airs. Are you ready to cook with me?! Tune in!! 📺💻🖥

What do you think about Amy Roloff expanding her TV experience with this appearance? Do you hope maybe one day we’ll see her with her very own show? Sound off your thoughts in the comment below.