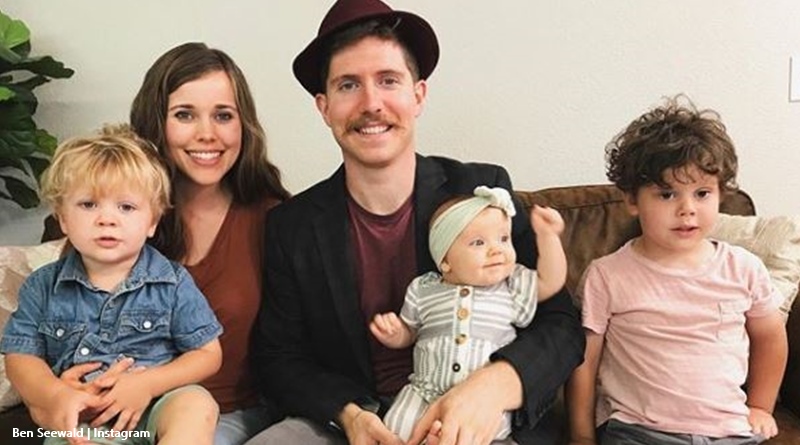 Counting On fans know that Ben Seewald suffered a loss when his grandad passed away from cancer. But, he and Jessa Duggar were grateful they managed to spend Thanksgiving with him before we died. Now, Ben took to Instagram and shared a post with a smiling emoji. So, it’s nice to see him feeling a little bit better. The clip showed a behind the scenes shot of Jeremy Vuolo.

Ben Seewald’s quite active on social media and has nearly a million followers. So, when his granddad passed away this month, fans held him in their thoughts and prayers. TV Shows Ace reported that Ben quoted some bible verses and wrote about how he took comfort from knowing they would meet again one day. Plus, “Ben…shared a sweet picture of his baby girl, Ivy, with his grandfather. The picture was taken on Thanksgiving, which is the last time that Ben and Jessa’s family got to visit with him.”

So, it’s been a sad time for him. But the Counting On star found time to smile at his brother-in-law, Jeremy Vuolo. He shared a video clip to his Instagram late Sunday night showing Jeremy trying to get a shot right. They made cocoa, and it looked like a lot of fun. Ben captioned his post with, “Behind the scenes. Best friends don’t just drink hot cocoa together…they boomerang it! 😆” In the video, we see Jeremy being coached on exactly where to focus his phone camera, and what was needed.

In the video, Jeremy finally gets it right by capturing the creamy foam on top of the drink. He’s really excited and says, “That’s going on the gram baby.” And it did, but not exactly the same. Counting On star Jeremy shared it on his Instagram Stories in a gif format rather than in a post. Some fans wondered what on earth Ben meant when he spoke about a boomerang.” One fan said, “Haha I don’t know why this is cracking me up so bad, but I need to see the boomerang now!”

Then another Counting On fan said, “I still have no idea what a boomerang is… #underarock.” Well, there are two meanings to a boomerang online, The first one could simply mean you go out with buddies and both share similar pics or vids. The other is an app.  Social Bees Media explains,” Instagram launched Boomerang. This fun and exciting app lets you create gifs, called Boomerangs, that you can later post on Instagram, Twitter or Facebook, send them to a friend on Messanger, or simply save them for personal use.” And that’s what Jeremy posted.

What do you think about Ben Seewald getting a smile on his face after the sad news about his grandpa passing away? Did you enjoy the behind the scenes clip of Jeremy Vuolo that he shared? Sound off your thoughts in the comments below.