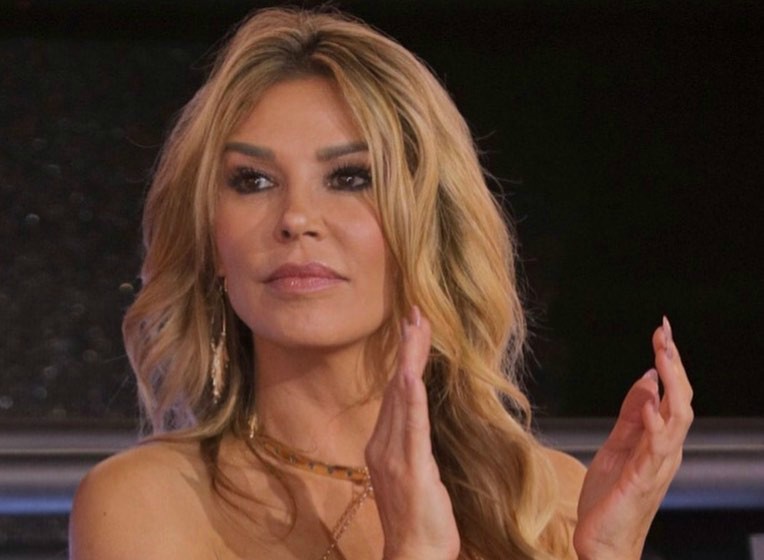 Season 10 of The Real Housewives of Beverly Hills hasn’t even finished filming and Brandi Glanville is already throwing shade at her co-stars. TV Shows Ace reports that the reality star revealed earlier this week that things are so tense on the show that one of the Housewives is refusing to film.

The Real Housewives of Beverly Hills alum Brandi Glanville returns for a few appearances in the upcoming season. Rumors have swirled that a lack of drama is the reason for her return. But during a recent Just the Sip podcast, Brandi spilled some cryptic tea with host Justin Sylvester, reports Reality Tea.

The fighting amongst co-stars is one of the main attractions of the show. Like the debris from a car accident, you can’t look away. When Justin asks Brandi if she ever feels pressure to say things because it’s her job, Brandi says that’s just who she is. The reality star then alludes to one of the women inserting herself into arguments to stay relevant on the show.

“I  personally don’t, but I see some other women feeling like they gotta get their foot in the game. They’re not relevant this season because they’re not involved in the fighting. That’s when I feel like it feels fake. You don’t care about this fight, so don’t get into it. You know what I mean? I’m not getting in a fight with anyone if it doesn’t involve me or someone I care about.”

While Brandi didn’t name names, fans recall co-star Teddi Mellencamp butting in on many arguments in the past, particularly ones involving Camille Grammer or Lisa Vanderpump. As an accountability coach, Teddi inserts herself into conversations in an attempt to hold her co-stars accountable.

Host Brings Up Shady Tweet of Brandi’s: “All Skeletons in the Closet WILL come out…”

In early December, Brandi posted a tweet about keeping secrets. Since RHOBH is currently filming, podcast host Justin brought the tweet up in an attempt to get the dirt. The tweet ended with the hashtag #own it, which is a slogan regularly uttered by Lisa Rinna.

“If you sign up for a reality show any & all skeletons you have in the closet WILL come out eventually you can’t have secrets & expect to keep them EVER !!! so it’s just best to be honest #own it.”

If you sign up for a reality show any & all skeletons you have in the closet WILL come out eventually you can’t have secrets & expect to keep them EVER !!! so it’s just best to be honest #own it

Again not naming names, Brandi teases that someone on the show is being ‘fake,’ and hiding secrets from viewers. Given that almost every RHOBH cast member has lawsuits that aren’t discussed on the show, Brandi could  be referred to anyone’s skeletons.

“As you know, there’s somebody on the show that’s not being herself. She’s faking it and she has some skeletons in the closet. And, guess what? They’re out. I brought [the skeletons] out. I opened the closet.”

The fierce blonde bombshell had one warning for her co-stars: Don’t call her a liar.

Lisa Vanderpump may not be on The Real Housewives of Beverly Hills anymore, but drama still follows her everyone. The Cheat Sheet reports that TMZ recently caught up with Lisa and asked her about the worst Christmas gift she’d ever received.

Without missing a beat, the queen of shade replied that the gift was from “Kyle Richards.” However, when asked what the present was, Lisa couldn’t say. Why?

We asked @LisaVanderpump about the worst Christmas gift she ever received… she says it's from a housewife! 👀
#rhobh #LisaVanderpump #tmzhttps://t.co/PwZtlXOPWQ pic.twitter.com/6VuddAWDSA

You can watch the full episode of Brandi’s podcast appearance on YouTube.

Season 10 of The Real Housewives of Beverly Hills premieres on Bravo sometime in 2020.