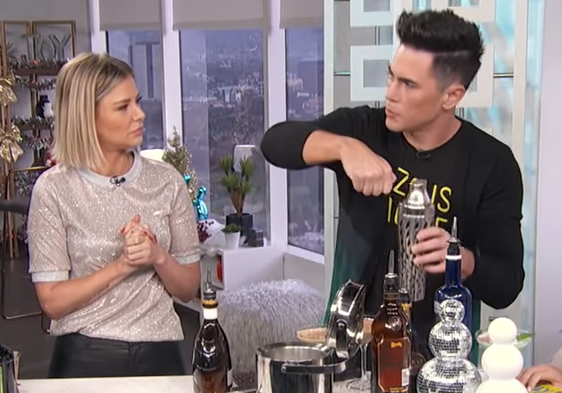 Tom Sandoval and Ariana Madix from Vanderpump Rules seemed quite ready to get down with the afterlife once they had a few drinks. While playing with Ouija Board, the couple had some hot questions for their new ghost friend. These questions included one about who the ghost thought was the biggest… let’s just say it rhymes with witch. As well as which male cast member has the biggest… “ego.”

Tom And Ariana Met Their Ghost And To Say They Had A Good Time Is An Understatement!

So, Tom and Ariana supposedly don’t believe in ghosts, but they went along with it anyway. After they read the instructions and figured out the right words to say, they were quickly approached by their ~spirit~. Here is when they began to believe in ghosts as they realized neither of them was moving the dial. This is probably a good reminder to never mess with the departed.

After they drank a bit and got comfortable with their new undead friend, Ariana started firing off the questions. Many fans were probably dying to know what the answers were and apparently the ghost thinks Stassi is the biggest witch on the show, Cosmopolitan shared.

As their game was ending, it was becoming clear the ghost probably had a little too much to drink. Giving a proper “yes” or “no” was becoming a difficult job without the help of some jibberish.

Hopefully, the ghost checked back in with Tom and Ariana the next morning for their “magic hangover cure.”

“Magic Hangover Cure?” Sign All Of Us Up Please!

According to Pajiba, while debuting their new cocktail cookbook, Fancy AF, the pair was asked what their cure for a hangover is. Tom gave a simple answer and breakdown explanation, Midol Complete. It’s able to rid all of the toxins from your body via a diuretic. Reduce the redness and swelling in your face by an antihistamine. For the headache, a pain relief component. And the cherry on top, caffeine, to get your body going.

There’s a hangover cure section and taking Midol Complete 30 minutes before you need to be up is included.

While at the launch party for this book, People got to talking to Ariana about the cast all moving into the same neighborhood. She called it the “Great Valley Migration.”

They expressed that the move has been great but there is still some separation between their reality tv show and their lives.

“We all have our own things going on, but we are also very, very, very involved in each other’s lives,” he said. “Obviously being on the show, as the seasons have gone on, we have evolved, and we are going from apartments to houses, but it is still the same dynamic.”

Madix added that the response from those already living there has been positive, everyone is very friendly and kind.