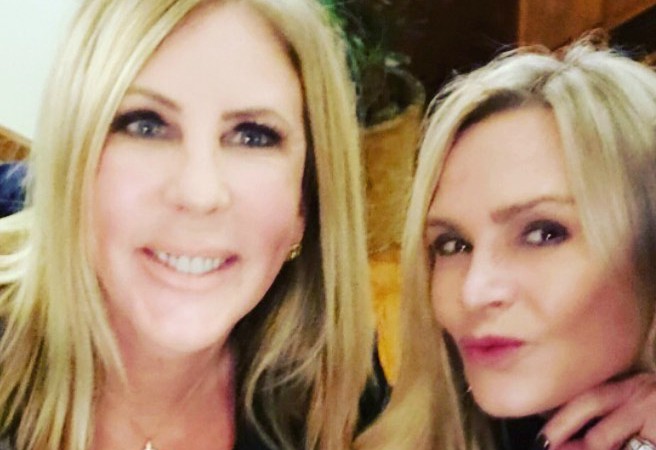 The Real Housewives of Orange County’s Tamra Judge and Vicki Gunvalson are not happy about things that were said about them on camera. Co-star Emily Simpson referred to them as “senior citizens” at one point. She said, “This is just like being in high school, but instead of the senior girls hating me, the senior citizens hate me.”

HollywoodLife reveals how Emily continued age-shaming her two co-stars. During the episode airing December 10, she called them “old” and “geriatric.” Emily was speaking to co-stars Kelly Dodd and Gina Kirschenheiter at the time.

Emily further stated that the OG of the OC, Vicki, should be in a “convalescent home.”

The morning after the episode aired, RHOC’s Vicki took to Twitter to express her displeasure at being called old. She wrote,

“Watched @BravoRHOC last night & was shocked to hear @RealOCEmily bash me about my age of 57. Referencing me as ‘old, I should be in a convalescent home, and geriatric’. Really? I can’t change my DOB and you will get there too. “

Watched @BravoRHOC last night & was shocked to hear @RealOCEmily bash me about my age of 57. Referencing me as “old, I should be in a convalescent home, and geriatric”. Really? I can’t change my DOB and you will get there too. #disrespectful #rude

Vicki ended the tweet with hashtags #disrespectful and #rude. Tamra, however, took a more direct course of action.

Hours after the episode aired, Tamra took to Instagram to share a series of hot bikini photos with her followers. In the caption, the called out Emily’s “hypocrisy” and threw in a veiled jab at her co-star’s recent hip surgery with the hashtag #myhipswork.

Sporting a blue and white bikini, the Cut Fitness owner showed off her abs and toned muscles. The series of photos also included an NSFW meme of an old woman. The text in the meme read, “I may be an old b*tch but you’re a f**king douchebag.”

Fans flooded the comment section of Emily’s most recent photo promoting the RHOC episode. Many fans felt insulted, including one who pointed out that a lot of the fans of the show are closer to Vicki and Tamra’s age than to Emily’s.

All new episode of #RHOC 🍊tonight as we end our #keywest vacation! Who will be watching?! . TAG your RHOC watching pals below 👇🏻and remind them to tune in! . Things to ponder: 1. Do you know who #Hemingway is? 2. Do cat bites give you rabies? 3. Have you ever jet-skied with sharks? . My bathing suit by @miraclesuitswim . @kellyddodd @ginakirschenheiter @braunwynwindhamburke #vacation #drama

The age-shaming comments came during the cast’s trip to Key West. However, Emily’s gaffe wasn’t the only one that caught the attention of viewers. Yahoo Entertainment reports that co-star Braunwyn Windham-Burke organized an excursion to the home of famed author Ernest Hemingway.

The iconic author famously resided in the southern Florida town. The works he wrote there include his novel To Have and Have Not and the short story ‘The Short Happy Life of Francis Macomber.’ The author passed away in 1961 and his estate is now a Key West tourist attraction.

RHOC stars Tamra, Vicki or Shannon Beador, had ever heard of the author. When touring his home, they wondered if the home’s owner (Hemingway) was hosting a dinner party that evening.

Fans took to Twitter to drag the ‘Tres Amigas’ for their ignorance, with many wondering if they’d even gone to high school.

“These women don’t know who Ernest Hemingway is ?! Did they go to Highschool ? Tres Amigos are more like Tres Stupidos”.

These women don't know who Ernest Hemingway is ?! Did they go to Highschool ? Tres Amigos are more like Tres Stupidos 🙄 #ReadABook #RHOC pic.twitter.com/1TRfay0jLw

Tune in next week to the Season 14 finale of The Real Housewives of Orange County airing Wednesday on Bravo.