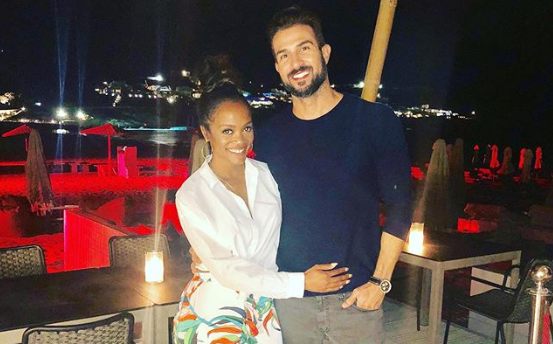 Rachel Lindsay and Bryan Abasolo will be seeing a change of scenery for their first married Christmas. They are going to go from Miami to Dallas. After all, everything’s bigger in Texas, Christmas included!

“This year we are spending it in Dallas. We spent the last two in Miami,” the Bachelorette alum said on Thursday, December 12. “For my family, it will be one of the most low-key Christmases we will ever have because my nephews are going to visit the other half of our family, so it will be super chill, just exchanging a few gifts Christmas morning.”

She went on to note that their usual family celebrations are a bit more exciting than this “low-key Christmas” they plan on this year. She mentioned they would typically do a large brunch as a family. Later in the evening, they’d enjoy going to a movie together.

The couple tied the knot in August in Mexico and traveled to Greece for their honeymoon. These newlyweds have embraced the holiday season, a lot of it has to do with Lindsay’s name change.

“This year, as the first year of being Mrs. Abasolo, I have really taken in decorating,” Lindsay said about the season. “I got our stockings with our letters on it. I went Christmas shopping with his mom.”

She added: “It’s not our first Christmas together, but it is as a married couple and I have really been stepping it up a notch.”

My skin is super hydrated and glowing #nofilter for the holidays at @IdealImage MedSpa’s newest clinic in Midtown Miami! I got the never-before-seen O2 HydraFacial, aka “The Angel Glow!” The treatment exfoliates and removes all the impurities from your skin while infusing nutrients and moisture into the skin. The O2 HydraFacial is for all skin types. It’s a 30-minute, 3-step process, and leaves your skin super hydrated, clear, healthy, and more youthful looking! Bryan was so jealous of my skin and decided to get it too 😉 Check out my stories to see how we’re heading into the weekend absolutely glowing! P.S. I’m also co-hosting their grand opening celebration right here in Miami on 12/12. If you’re in Miami, stop by and say hello at Ideal Image Midtown Miami in the evening!

There’s A Chance This Is Going To Be Their First, Last And Only Christmas Without Kids

The couple came together during season 13 of The Bachelorette, Abasolo won the final rose and popped the question. And if everything goes according to plan, this could be their first married Christmas as well as the only one without children.

“We hope to have kids sooner rather than later,” the Texas native said back in October. “We’re not preventing it, but if we’re planning, we’ll have kids in the next year.” The fan would love to hear that a baby is coming from this couple.

Bryan Abasolo is also on board with the expansion of their family, according to UsWeekly, he’s as ready as he’ll ever be.

Rachel Lindsay says they are definitely on the same page about their desires. She also noted that she’s sure she’ll be the stricter parent of the two. That’s just who she is, she said it, not us.