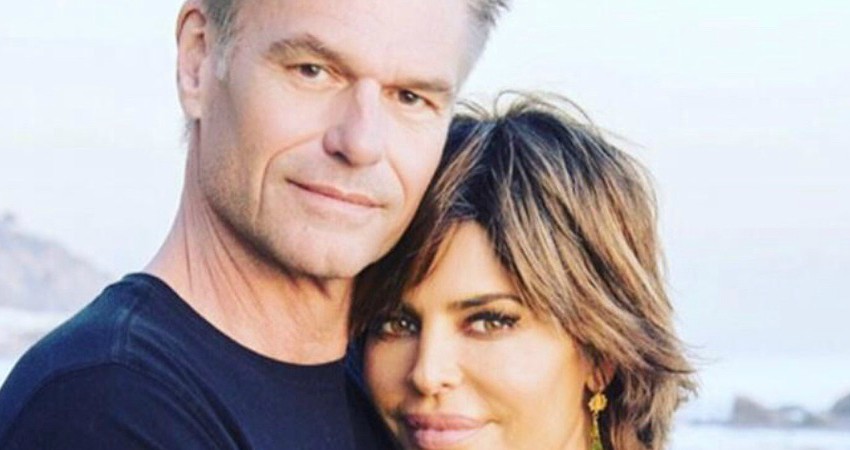 Harry Hamlin is opening up about how he met his wife, The Real Housewives of Beverly Hills star Lisa Rinna. During a recent radio interview, the LA Law actor recounts their meet-cute that rivals every rom-com ever made. The couple met over 20 years ago, before Lisa Rinna gained fame for her television roles.

Lisa Rinna may be a frequent face on QVC, but she got her start as an actress.  As fans know, Lisa has roots in the daytime soap Days of Our Lives. The brunette spitfire also starred on the primetime soap Melrose Place. Of course, she’s most well-known now for the reality show The Real Housewives of Beverly Hills.

People magazine reports that the love story started after a chance meeting in a restaurant. At the time, Lisa was working nights in a retail store selling sunglasses. Harry happened to be having dinner with the store’s owner when his now-wife showed up to drop off the keys to the store after the closing shift.

“It was sparks right away” for the Mad Men actor. However, there was a slight miscommunication first about how she found the circus ‘sexy.’

“She had just been to the circus the day before and she said, ‘Oh my God, I went to the circus last night and it was so sexy!’ I’m thinking to myself, ‘Wait a minute, here’s this girl. She’s sitting there and the elephants, right, and the clowns and all that.’ Because the only circus I’d ever been to was Ringling Brothers. But she was talking about Cirque du Soleil, which is very sexy, but I didn’t know that. I had not seen Cirque du Soleil at that point, so I thought, ‘If this girl can be turned on by elephant dung and whatever, I’m good with her.’”

How the Couple Keeps the Spark After 22 Years of Marriage

The RHOBH star posted a throwback picture of their wedding day earlier this year to celebrate their 22nd anniversary.

In an appearance on Andy Cohen’s Watch What Happens Live, Lisa was asked why their marriage works, especially in Hollywood where a marriage lasting over 20 years is almost unheard of.

“We are crazy about each other, and you can’t create that, you can’t make it — it either is, or it isn’t. I think you either really dig somebody, or you don’t. And I’m so blessed, we are so blessed that that happened for us.”

During a recent appearance on Live with Kelly and Ryan to promote his Broadway play, Kelly Ripa revealed that she and Lisa were “Instagram lovers.” The two actresses (Kelly got her start on the soap All My Children) follow each other on Instagram and regularly comment on one another’s posts.

In fact, when the RHOBH star got backlash for a dancing video she posted over the summer, Kelly came to her defense. However, Harry had no idea about Lisa’s side gig of busting a move. When the producers of the show cued up a video clip, Harry joked, “and THAT is why I don’t follow her on social media.”

Fans can see Lisa Rinna back on-screen when The Real Housewives of Beverly Hills returns to Bravo for Season 10 in 2020.