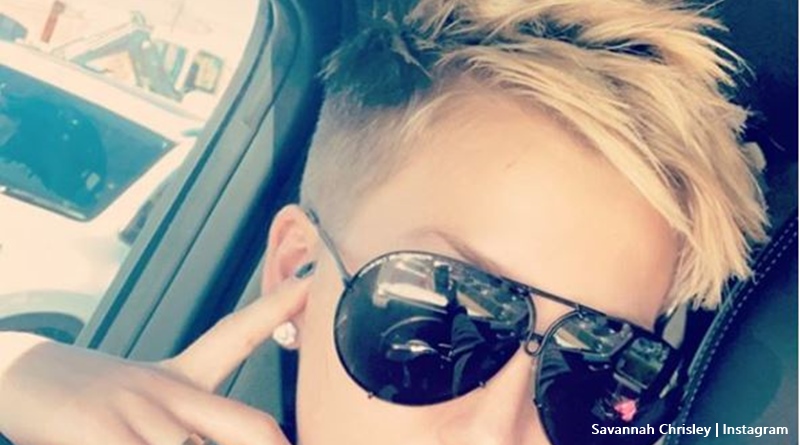 Chrisley Knows Best fans freaked out when they saw Savannah’s short pixie-cut hairstyle. But, she rocked it with such style, most people agreed she looked awesome. However, it seems that Savannah’s impatient for it to grow out as she is over it. Probably, she’s frustrated as such short hair’s very limiting on what you can do with it.

TV Shows Ace reported back in October, that Savannah suddenly popped up with almost no hair. We noted that her dad, Todd Chrisley teased her about her cut. But actually, the resemblance between the two really became obvious with that short style. After the first pic emerged, fans became used to her looking stunning. Photogenic, nothing she wore looked bad. Here’s betting thousands of fans and followers went for the same pixie-cut.

But now, The Chrisley Knows Best star’s over it. Given that she never planned the cut, that’s not a big surprise. Bravo TV reminds us that Savannah ended up with short locks after dying her hair went wrong. After several cuts and efforts to fix the problem, she just made the best of what she had. And, she probably started a new trend on the style. However, on her Instagram, she’s now regretting the lack of hair.

Over on Instagram, Savannah shared a photo of her with long hair. She captioned it with, “Missing my long hair…😩.” But she also noted, “don’t get me wrong…cutting my hair off was very exciting and something new!” Then she added, “But I’m ready for it to grow back now haha.” Anastagia Pierre, former Miss Bahamas, and owner of AP The Label took the opportunity to pitch a sale for her line of luxury wigs and hair extensions. She said, “Girl, come get a wig… while we both wait for our hair to grow back 😂💕.”

Chrisley Knows Best fans also reacted to her short haircut regrets. Here’s what some of them said about it:

Missing my long hair…😩 don’t get me wrong…cutting my hair off was very exciting and something new! But I’m ready for it to grow back now haha

What do you think about Savannah regretting her short pixie haircut? She’s over it already, so maybe we won’t see her go down that road again. Sound off your thoughts in the comments below.

Remember to check back with TV Shows Ace often for more news about the cast of USA Network’s Chrisley Knows Best.