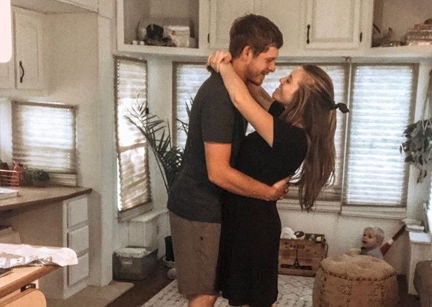 Joy-Anna Duggar has her man’s back through and through. After a fan made a not-so-nice comment about Austin Forsyth, she took the chance to set the record straight. On December 10th, Joy-Anna shared a picture on Instagram of her husband holding their son. Most fans found the photo to be adorable and loved it, but one seemed a little wary. So, the Counting On star took this opportunity to brag about the wonderful father and husband he is.

She captioned the photo, “My heart skips a beat when I see these two together!” Joy, 22, captioned her photo. “Austin is such a good dad! He makes it a point to hold Gideon and pray with him before bed! I love my little family!” Praises from the fans came pouring in, but one fan seemed to share a backhanded compliment of sorts. “Austin seems so serious and strange, but this is sweet,” the comment read. But the TLC star wanted to take the high road and kept her cool and responded with kindness.

“He can be a little more serious,” she explained, “but he actually has a pretty outgoing personality once you get to know him!” She even added a little smiley face as a reminder that there were no hard feelings. But Jill Duggar came in to back her sister and step up for her brother-in-law. “Uh, yeah, LOL… Not the most serious of the bros,” she clarified. “Def a cut up. Haha.”

My heart skips a beat when I see these two together!🥰 . Austin is such a good dad! He makes it a point to hold Gideon and pray with him before bed!🙏🏼 I love my little family!💜 . #cuddlesbeforebed #nightimeprayers #mymen #GideonMartynForsyth

But there is something strange going on with Austin Forsyth. In early December, the news came out that Forsyth is being sued. The lawsuit came in October from a couple who bought one of their renovated homes from them. The couple accused Austin of lying about obtaining a permit to put a septic tank on the property. According to the paperwork, they “began noticing that their yard was saturated on the driest of days and that an unmistakable foul odor of human waste emanated from their yard” shortly after they moved in in August.

Austin Denies The Accusations And Defends Himself

According to InTouch, they had an expert come out to investigate the issues. It was discovered the “land was unsuitable for the septic system that was installed.” The couple was told they were going to need to put in a new system that would cost “excess of $20,000.” Because of this, the couple is seeking to “rescind the purchase of the house due to the signed fraudulent statements of the Defendant during the sale.” Upon that not working out, sue for “damages suffered, for punitive damages, costs, attorney’s fees and all other relief this Court deems necessary.”

Austin, on the other hand, “guaranteed that all work was done with proper permits.” He also claimed that he was “not required to obtain a permit” to install the septic system. Though, he did deny the accusations, “falsely stated that all necessary permits were obtained for the work done on the home and that it was done according to code.” The suit is to be settled in court.