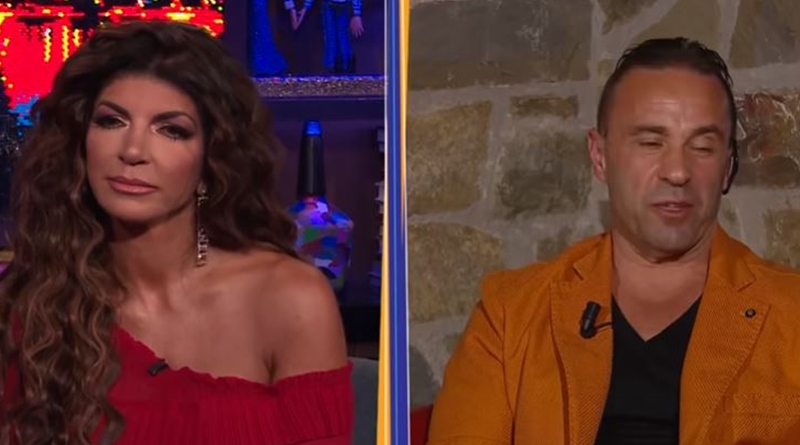 Joe Giudice, currently in Italy, appealed his deportation twice. In the meantime, Teresa won’t see him again until at least the summer. The kids hopefully get to see him at Christmas. But, it looks like they may never see their dad again in the USA. He only has one more chance to appeal and the odds on him winning his appeal don’t look good.

TV Shows Ace reported that Theresa told Andy Cohen that she won’t see Joe until the summer. She’s working through the festive season, and after that, the kids go back to school. At the time, we mentioned it seemed like a very long time. While Teresa may see him Italy or elsewhere, it looks like she may never see her husband again in the USA. There’s loads of speculation, that if that happens, then their marriage is over.

Yahoo Entertainment covered the newest reveals that came via the RHONJ show on Wednesday.  Teresa’s distraught as Joe just lost his second appeal against his deportation. The Real Housewives of New Jersey star now faces the ever-increasing reality of life without her husband by her side. Joe Giudice almost exhausted all his appeals and after one more, that’s it. And, the chances of winning that final appeal look really dismal.

In the Bravo episode, we saw that Teresa said, “I want him to come home…We have four daughters together. I didn’t sign up to do this alone… I’m scared.” And, obviously, Joe’s scared and unhappy as well. James J. Leonard, Jr. represents the family as a lawyer. And, what he said to Teresa about Joe Giudice sounds chilling. “His immigration lawyers made the arguments to the lower courts and the courts have denied it very aggressively. They blew up every single argument,” he said. Now, all they can do is appeal to the “third circuit.”

It looks like the chances of the third circuit coming out with a positive ruling seem infinitesimal. He won’t even put a number to it, but probably the chances are less than “10 percent.” That’s because they can’t find anything new that might change their findings. Somehow they need to convince the third circuit that the first two made an error. Meanwhile, the legal fees rise, bringing financial challenges. But, Teresa simply doesn’t care what it costs. She wants Joe Giudice back with his family and seems to determined to pursue it to the last possible outcome.

Joe Giudice went to jail for “mail, wire and bankruptcy fraud.” Born in Italy, his family relocated to the USA when he turned one-year-old. As he never got American citizenship, like anyone not legally resident in the country, he faced deportation for his crimes. The USA comes down very strongly on immigrants with criminal backgrounds. So, despite living there most of his life and having a family, the courts take a strong line against it.

What do you think about the fact that Teresa may never see her husband again in the USA? Do you think an exception should be made for Joe Giudice because his wife and kids live in America? What happens if he never returns? It seems unlikely Theresa uproots her entire life to go and live in Italy. Sound off your thoughts in the comments below.

Remember to check back with TV Shows Ace often for more news about the deportation status of Joe Giudice.