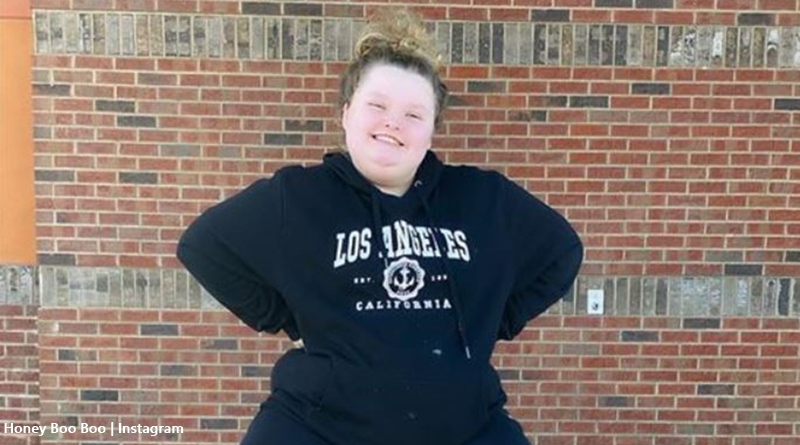 Honey Boo Boo, aka Alana Thompson, started getting a Fab Fit Fun subscription box this year. She’s making an effort to live a healthier lifestyle, which includes losing weight. With her custodian and sister Pumpkin, she’s working at her image and through the harsh reality of estrangement from her mom, Mama June Shannon. Just 14, unbelievably, during the season of love, someone found it in themselves to body-shame the teen.

Honey Boo Boo often gets body-shamed, which is shameful in itself, fans think

Fans of Alana Thomspon know that her mom and others in the family struggle with their weight. But, for her, it’s not too late to try and stop the trend as she’s young. And, she’s really making an effort these days. Despite body-shamers, the young and cheerful personality keeps on smiling through life. TV Shows Ace reported in October, that Honey Boo Boo “started doing Boom Bod promos. And, she’s losing some weight.” But even then, someone thought it okay to body-shame a teen.

On Tuesday, Honey Boo Boo took to her Instagram and shared a photo of her sitting astride a giant ball at Dave & Buster’s. Always amusing, Alana looked like she sat on a giant egg. In the picture, she looks obviously slimmer around the waist, pretty, and very happy being out with friends. But someone decided to slap at her. Alana captioned her pic with, “uptown girls 🥳.”

Many fans responded and complimented her on her happy post. One said, “Alana you must be loosing weight that’s awesome your waste looks so small keep up the good work girl (sic).” But one critic decided to body-shame Honey Boo Boo, saying, “Your almost as round as that ball (sic).” Another responded with, “lmao.” Another person commented on “wide-angle.”That really annoyed fans of the young teen. After all, it’s not a nice thing to say at all. They slammed the trollers for their comments.

In defense of Honey Boo Boo

Quick to defend Honey Boo Boo, fans told off those who said cruel things to her. Here’s what some of them said:

What do you think about people who chose to body-shame a young teenage girl who’s making an effort to lose weight and get healthy? Do you think that’s shameful? After all, the festive season’s meant to be a time of love and kindness. Sound of your thoughts in the comments below.