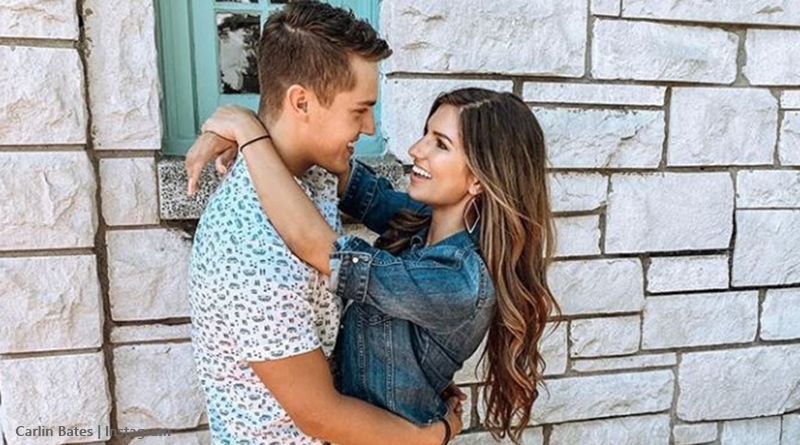 Bringing Up Bates star, Carlin Bates Stewart just hit her 30-week preggo mark. And, she celebrated it by going out in the snow with a little dog in her jammies. Actually, it looked really cold, so no wonder she declared it a “#pajamaworkday.” And, as usual, she used her clever play on words to describe the experience.

TV Shows Ace reported that back in October, fans “spotted Carlin’s baby bump.” And, ever since then, they’ve been “on baby watch.” They love the idea of following her journey to being a mom. Expecting baby to come along in 2020, fans simply can’t resist telling her how excited they feel for the young couple. She and Evan Stewart married in May this year and lost no time in preparing to become a family of three.

Romper reported that the first pic we got of the new baby came in November. Carlin shared the first of her sonograms and Bringing Up Bates fan became super-excited. Each week, she posts a photo, and for 30-weeks along, fans agree she’s really tiny. Some of them complain it’s not fair, as they “blew up” by that time. At 40 weeks, she should expect the birth. That’s not a long time to wait, so soon, hopefully, the news of a safe birth comes along.

Celebrating the snow in jammies

Taking to her Instagram on Tuesday night, Carlin shared a photo of herself out in the snow. She had a little dog with her, which at least looked happy about the snowflakes. Carlin captioned her post with, “It may have been 60° yesterday, but it’s doggone cold now!! 😂 🐶❄️🤣🌲 #30wks.” Note that play on words about the dog that fans love so much. Some fans think it’s not her dog, and note it maybe belongs to Zach & Whitney.

Jammies in the snow seems like an odd thing to wear when expecting a baby. Hopefully, the Bringing Up Bates star didn’t get too cold. One follower pointed out that maybe Carlin felt “doggone cold” as she wasn’t suitably dressed. But, others just loved the cute pic. And, typical of Carlin, people wanted to know where she bought her clothes from. One fan said, “Ugh! These are the times I wish I lived further East in TN! 😂 Also, your slippers are the CUTEST!”

Even in her jammies, Carlin managed to look good. The beautiful Bringing Up Bates star got her usual admirers telling her how much they love the way she looks, even in jammies. And, the tartan checks suit her very much.

What do you think of the photo that Carlin Bates shared showing her celebrating the snow in her jammies? Sound off your thoughts in the comments below.

Remember to check back with TV Shows Ace often for more about the cast of UPtv’s Bringing Up Bates.