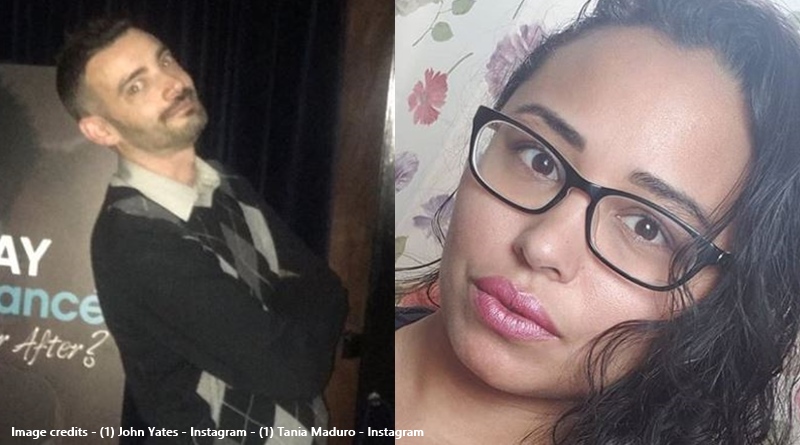 90 Day Fiance featured Tania Maduro making Syngin “work for his keep” when she told him to fix the shed that will be his new home. The uncomfortable scene got many fans feeling Tania and her mother were way off the mark. Later, blogger and guru, John Yates made a quip about slavery on his Instagram and Tania went off at him. Some people felt the “joke” was in poor taste, but Tania probably made it worse when she slapped at him over being LGBTQ.

John took to his Instagram and unusually, shared something critical of Tania. She’s generally described by other bloggers as being the most unpopular person on Season 7 of the show. Right from the first episode, we reported on that. Just one search on Twitter reveals the truth of this. John said on his post, “I thought they outlawed putting Africans to hard labor as soon as they got here around 150 years ago.” Obviously, he referred to Tania making Syngin repair the shed. Also, obviously a joke, many people agreed with Tania that it was, nevertheless in poor taste. But Tania really went off about it.

In reply, the 90 Day Fiance newbie said, “Joke about us all you want. But to make a slight joke about slavery is really poor taste. Nothing is funny about slavery and it still has many forms today. And to compare a white dude who came here by choice to the many of black people who were kidnapped and sold, beat, tortured, and whose FEEE (sic) labor built a lot of this modern western world… to say again… is very poor taste.”

Me on my way to Connecticut the minute Tania leaves so I can find Syngin and help him escape #90dayfiance pic.twitter.com/P4q7nXv8Mw

Actually, we heard it multiple times on the show already. Then she added, “But to joke and compare again a dude who is of European decent and not african to slavery, like other followers have said.. is kind of in poor taste.” Not content to leave it at that, the two 90 Day Fiance people got into it a bit more. After arguing about how and whether she should have better prepared for Sygnin, and how she holds it over him, Tania came back with a low blow on John about LGBTQ.

While Tania had some supporters who did agree the j0ke was in “poor taste”, some opinion of her slipped when she started on about LGBTQ. Tania said, “And being a g*y man white a MA in history…I’m sure there were G*y, white Male slave owners as well.” Then  John just said to the 90 Day Fiance woman, “I don’t even have the f*cking words to reply to that stupidly.” And, yet she still went on, repeatedly going off, over and over, and over about the slavery quip.

Fans the TLC show gave it back to Tania. One said, “the pathetic thing is he said something regarding things YOU DID!! Don’t get it twisted sweetheart!!” Another noted, “Europeans were enslaved as well darling, not just black ppl from Africa. So get over it… and stop making everything so damn political! You’re on a f*cking reality show for Christ sakes!!!” Meanwhile, another person said, “and? Your point is what exactly? You made his statement into something that it was not intended to be… political! Just stop 🛑”

More fans of the show lashed back at Tania. One said, “why would you bring being g*y into this? You wanna hold someone accountable yet, you are here doin the same thing. How about you step back, and take a good look at the way you talked to Syngin? The way your mother talked to him? Stop throwing everything “you did” in his face? You make it sound like he OWES you something. A relationship isn’t holding sh*t over your partners head. Grow up.”

Angry, another 90 Day Fiance critic told off Tania. She keeps on about Sygnin being a South African. One would almost think that’s a crime these days. So, the critic said, “maybe if you felt that way you shouldn’t have brought him here then. 🤷🏻‍♀️ you don’t bring someone over here and then hold over their head the fact that you were supporting them, because duh, obvs. And then expect them to do bullsh*t that you lied about and said was completed. Seriously if anyone should have been tired by that point, it’s him. You act like he owes you sh*t for you bringing him here. That’s not how love works 🤷🏻‍♀️.”

Some followers disappointed in John, despite not liking Tania

John and Tania really highlighted how very careful people need to be when talking on social media about touchy subjects. The Wrap noted that well-known personalities “joke about slavery at their peril.” They talked about British comic Stephen Fry a few years back. Some fans of John who read the comment about slavery felt he took it too far. Others didn’t like that Tania started referring to his sexuality. But, while 90 Day Fiance critics slammed Tania, others expressed their disappointment at John’s “joke.”

One person noted, “I agree that the joke was in extremely poor taste and just outright ahistorical. It’s not worth engaging them because they’ve already made a judgement about you and they are going to fixate on that rather than engage in a good faith discussion.” Another 90 Day Fiance said follower said to John,  “Yikes. Consider editing this post. It reads like you are making light of slavery.”

What do you think about all of this drama between John Yates and Tania Maduro? Do you think she’s making something political that shouldn’t be? And why bring his sexuality into it? Or, do you think he, or perhaps both of them, were wrong? Sound off your thoughts in the comments below.

Remember to check back with TV ShowsAce often for more news about the cast of TLC’s 90 Day Fiance.