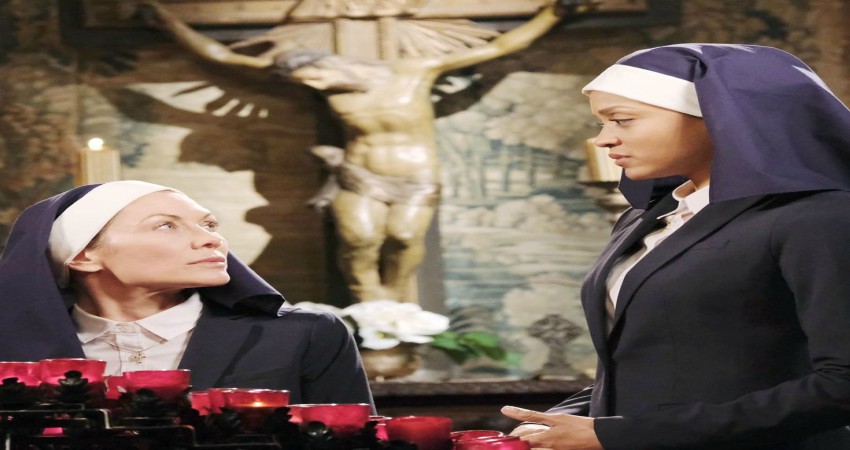 Days of Our Lives continues to entertain fans with the twists and turns of the one-year time jump. The sudser has even more shocking storylines planned going into the New Year. Spoilers say Jennifer (Melissa Reeves) is released from the hospital. Abby’s (Kate Mansi) investigation into Jennifer’s accident heats up as Rafe (Galen Gerig) begins to wonder about how dismissive Hope (Kristian Alfonso) is being about her cousin’s fall.

What else does the DOOL have in store this week for viewers?

The Real Nuns of Days of Our Lives

During the unseen year, both Lani (Sal Stowers) and Kristen (Stacy Haiduk) became nuns. Kristen convinces Lani to return to Salem to fight for Eli (Lamon Archey.) However, Eli has moved on to Gabi (Camile Banus) because he doesn’t know Gabi’s role in his break-up with Lani.

The former couple cross paths this week and they are both in for surprises. Eli is shocked to see Lani in a nun’s habit. She is devastated to find he’s in a relationship with her enemy. Kristen returns to Salem to help Lani get Eli back.

However, Kristen runs into trouble of her own: JJ (Casey Moss.) It turns out that Kristen caused the death of JJ’s girlfriend, Haley (Thia Megia.) He wants revenge when he runs into Kristen. Lani intervenes, but can she stop him from killing Kristen?

Eric (Greg Vaughan) just found out that Sarah’s (Linsey Godfrey) baby is his and not Xander’s (Paul Telfer.) Unfortunately, he might not get much time with his daughter. Baby Mickey is diagnosed with cancer.

Eric and Sarah head out of town to find the best treatment for their child. But don’t worry – they will be back because speculation is that the baby hasn’t met her real dad (or mom) yet.

Alison Sweeney Announces Brief Return to Days of Our Lives

Actress Alison Sweeney played Sami Brady on DOOL for 21 years. She left the soap in 2014 with occasional appearances, such as when Peggy McCay (and Sami’s fictional Grandma, Caroline Brady) passed away. Soap Opera Digest reports that during press for her upcoming Christmas movie, Alison Sweeney revealed a return to DOOL in 2020.

Sami is back, causing some trouble. I had a great time being there. My scenes are not going to air until next Summer, next August,”

It’s anyone’s guess what kind of trouble Sami could cause. John (Drake Hogestyn) and Marlena (Deidre Hall) could certainly use a little shaking up. Or perhaps something happens with Sami’s son, Will (Chandler Massey.)

Tune in to Days of Our Lives weekdays on NBC for all the drama.