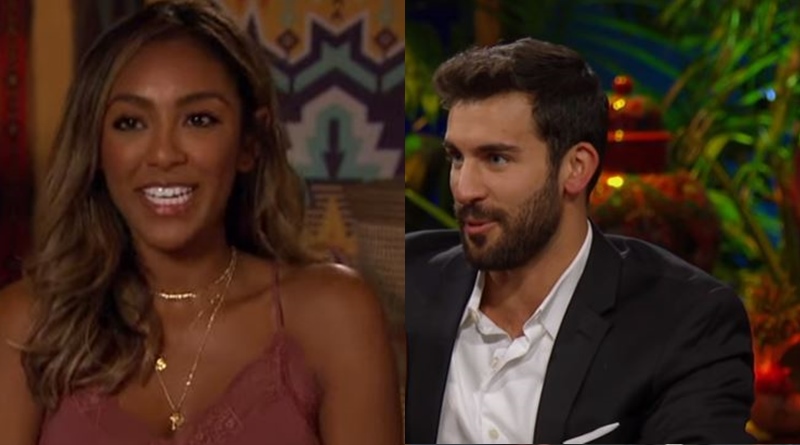 BIP fans recall that Derek Pleth and Taylor Nolan were engaged but they broke it off. But, they also noticed that on the ABC show that Derek and Tayshia Adams also got along very well. Tayshia took up with John Paul Jones, but that didn’t work for her. And now, it looks like Derek Pleth might be making a play for her again. This week, Derek got flirty with her over on her Instagram.

Notably, this is the second time that Derek’s indicated Tayshia’s on his mind. In October, TV Shows Ace reported that “Tayshia Adams showed clear, romantic interest in Derek.” So, he “decided she was who he wanted.” But we also noted that “Tayshia seemed torn between Derek and John Paul Jones.” She went off with John, and that’s history. But, we cited a story by Cheatsheet where they noted, “he always had an interest in her and that still hasn’t changed.”

Now, it seems that BIP alum, Derek Pleth’s still single. And, so is Tashiya, so if he’s that interested, it won’t hurt him to hit on with her, some fans think. Tayshia shared a post on her Instagram on December 3. It showed in al d’Isere, in the French Alps dressed in white, and looking stunning. She captioned it with, “Cozy in the Chalet✨❄️🏔 Arrived to the French Alps today with @boohoo for the most epic ski trip! Can’t wait to shred some fresh pow tomorrow! 🎿” And, Derek posted a flirty reply.

Derek’s comment on the post got up the hopes of BIP fans. Perhaps it leads to something? He wrote, “need someone to tie your shoe?” Fans responded to the post. One of them said, “I’ll answer for her…..yes, she does. I’ve needed you to tie her shoe since you left BIP. Make. It. Happen. Please, thank you, the end.” Another noted, “omg I see a reunion!” Meanwhile, yet another posted, “I’m here for it! Shoot ya shot. 🤙🏾👌🏾🏀.”

Well, if Derek thought she looked stunning in that photo, he might go for it a bit harder if he saw another post about Tayshia. On their page, @boohoo shared a video of her in the snow. They captioned it with, “We see you babe 😍✨ @tayshiaaa looks a dream on the slopes wearing our Longline Teddy Faux Fur Coat, Premium Feather Trim Cupped Bralet & Leather Look Paperbag High Waist Trousers!” Cool, confident and beautiful, it’s not surprising Derek flirts with her.

Sadly for Derek Pleth, Tayshia never responded to his comment in her post. But, that doesn’t mean she never noticed. She likes to keep much of her life fairly private, after all. Nevertheless, many BIP fans hope that his flirty comment at least goes a little bit further with her. Many of them would love to see the two stars pair up.

What do you think about Derek Pleth flirting on Instagram? Do you think Bachelor in Paradise alum Derek Pleth stands a chance with Tayshia Adams? Sound off your thoughts in the comments below.

Remember to check back with TV Shows Ace often for more news about the cast of BIP.