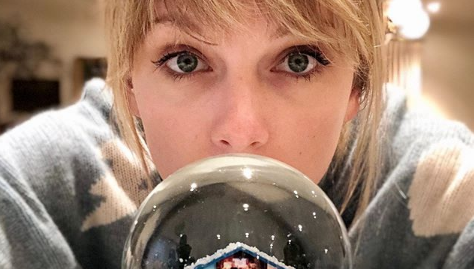 It’s no secret that Taylor Swift loves her fans. Literally. She dedicated her Secret Sessions to them. These little gatherings allow Taylor and her fans to get to know each other in an intimate setting as they listen her new music. During her album release for her seventh studio album, Lover, Taylor included excerpts from her private diaries.

Now Taylor has another way for fans to get to know her. The pop star is reportedly planning to release her first-ever documentary at the Sundance Film Festival. Taylor is also dropping a new Christmas song and music video tonight. The video will include some home videos.

Fans are going to see the superstar in a new light. A documentary about the Lover singer, titled Taylor Swift: Miss Americana is set to make its debut at the Sundance Film Festival, reports Yahoo! Entertainment. The film is said to be a “raw and emotionally revealing look” at Taylor “during a transformational period in her life as she learns to embrace her role not only as a songwriter and performer, but as a woman harnessing the full power of her voice.”

As TV Shows Ace previously reported, Taylor revealed to fans ahead of the 2019 American Music Awards that she’s been working on a documentary with Netflix over the past two years. She made the announcement in lieu of her ongoing feud with Big Machine label co-founder Scott Borchetta and manager Scooter Braun. In a lengthy Tumblr blog post, Taylor revealed they “declined the use” of her “older music or performance footage for this project.”

The singer is planning to celebrate “Swiftmas” well into January. Much to the delight of her fans, new music is coming just four months after the release of Lover. In a surprise video to Good Morning America, the 29-year-old announced that she’s dropping a new Christmas song she wrote days ago.

“Hey, I know this is pretty wild, but I’ve just written a Christmas song,” Taylor said. “I feel like it’s weird to just, like, wait a year to put it out? I don’t have anyone to ask right now except for,” Taylor said then pans the camera over to her cat. “Meredith, should I put out a Christmas song, like, now? K, that’s hard to tell.”

When in doubt, ask the itty bitty pretty kitty committee. When they shun you with silence, ambivalence, and judgmental brush offs… just put the song out anyway. NEW XMAS SONG AND VIDEO (made from home videos 👨‍👩‍👧‍👦) OUT TONIGHT #ChristmasTreeFarm 🌲🎄🌲🎄🌲🎄🌲🎄🌲🎄🌲🎄🌲 pic.twitter.com/GdlnCAKDLF

The new song will drop at midnight. The music is set to premiere on GMA tomorrow. Taylor took to Twitter to inform her fans that the music video will be “made from home videos.” This will provide fans with another look into Taylor’s life.

.@GMA EXCLUSIVE: @taylorswift13 is releasing a CHRISTMAS SONG!!!! We’re so ready for it… not sure what Meredith thinks 🤣 pic.twitter.com/Y06zGz2kek

The singer has been spending most of her “down time” with her British boyfriend Joe Alwyn. The couple has been dating for three years but refuse to talk about their relationship to the media. Taylor likes to get intimate with her fans, but she has kept this part of her life to herself. An inside source told E! News that she’s been spending most of her life with her longtime lover.

“Taylor has been spending a lot of down time in London. She doesn’t go out much other than to take a walk with Joe or go to the local pub,” the insider revealed. “They spend a lot of time with Joe’s family and friends. All weekend they had people come over or they went to family members homes.”

The anonymous source said that Taylor has become “close with Joe’s parents and brothers” and that Taylor and Joe “like to see them” on a regular basis. But, that does not mean the couple plans to get married soon. The insider added that Taylor and Joe just enjoy their simple life with friends and family. The singer also reportedly spent Thanksgiving with her beau.

The singer expressed no interest in getting married. She also admitted she is not ready to become a mom anytime soon. It’s obvious that the couple is busy with their respective careers. In a revealing new interview with People, Taylor admitted her body struggles and that she’s much more than a baby “incubator.” The singer seems content with being in a healthy and stable relationship for the first time in her life.

While Taylor and Joe like to keep their relationship private, they are spotted holding hands on occasion. She enjoys London and it has become the overlying theme on Lover. One of her songs is appropriately titled “London Boy.”