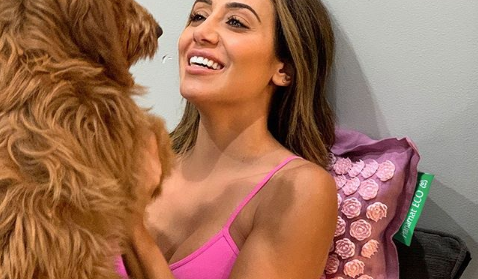 RHONJ’s Melissa Gorga has been listening to her gut instinct a lot lately. But her gut is not talking to her about her marriage. It’s telling her a lot about Teresa Giudice’s marriage to Joe Giudice. Melissa fears that the couple won’t stay together forever.

Teresa Giudice has always been honest about the state of her marriage. She admitted that she’s not even sure if she and her husband Joe will stay together. But her sister-in-law Melissa Gorga can already predict their future and it doesn’t look good, as reported by Us Weekly. On Wednesday’s episode of The Real Housewives of New Jersey, Gorga said in her confessional interview that she feels the couple will split in the near future.

“I would never say to Teresa, ‘Hey, you’re not going to end up with Joe.’ But my gut feeling is that Teresa is going to end up moving on,” Gorga said. “It will be super hard and it is scary but it’s also full of possibilities and I want her to start remembering that.”

However, Gorga did not reveal her true feelings to Teresa. Instead, she offered Teresa some support instead. She felt it wasn’t the right time to share her opinion on the state of their marriage. Gorga just offered Teresa a lending ear and some good advice.

“I just want to be happy again,” Teresa told her. “I haven’t been happy in so long.”

“You know what I think’s going to happen for you?” Melissa revealed. “I feel like, whether it’s with Joe or not with Joe, I honestly feel there’s a f***ing rainbow at the end.”

Maybe it’s a good thing that she keeps her comments to herself. As previously reported via TV Show Ace, her pregnancy comments confused fans. But Gorga didn’t mean that she was pregnant. She revealed that the TV show is like her “baby.”

Melissa feels ‘better than ever’ after turning 40

In a previous episode of Real Housewives of New Jersey, Gorga celebrated her 40th birthday. She wanted to prove to fans how good she’s been feeling lately. Last month at Bravo’s first-ever fan convention, Gorga said she wanted her birthday party to be the core focus for a reason. Turning 40 isn’t that bad.

“I’m excited for everyone to see my 40th this week because I think so many women stress about that and worry about it and think it’s like this awful thing, but it’s not,” Gorga revealed to Page Six at BravoCon. “It’s amazing. I feel better than ever. So I want everyone to know it’s OK to turn 40.”

Are you Ready to watch my 40th bday tonight?!! 8pm! On @bravotv !!! 🙌🏼. Huge shout out @lawrencescottevents events!!! For making this party everything I dreamed it would be!!! Dj- @jasonjani The Best!!!! Jumpsuit- @waltercollection Cake – @carlosbakery 💃🏻 #rhonj

Turning 40 looks incredible too. Gorga took to Instagram to share several photos of herself wearing a sparkly jumpsuit. She also posed for a cozy photo alongside her husband Giuseppe “Joe” Gorga. This Housewife proves that turning older doesn’t mean going to bed earlier and wearing conservative clothes.

What are your thoughts on Melissa Gorga’s comments on Teresa Giudice and Joe Giudice’s marriage? Do you agree that the couple may not last? Sound off below and follow TV Shows Ace for the latest on the Real Housewives of New Jersey.