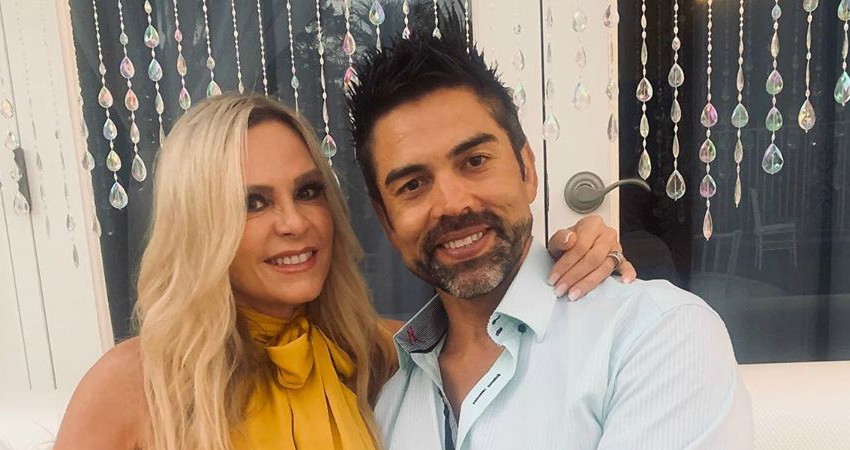 The Real Housewives of Orange County’s Tamra Judge used to be friends with co-star Kelly Dodd. The two had a fracture in their friendship that fans are watching play out on Season 14 of the hit Bravo show. The feud between Kelly and Tamra in a never-ending slew of insults, rumors and shade.

Reality Blurb reports that Kelly took to Twitter to dredge up an old clip of Tamra insulting husband Eddie Judge by using an ethnic slur. At the time of the airing, the slur went uncensored but Bravo has since started beeping it out. What did Tamra say that was so upsetting to Kelly?

It wasn’t Kelly herself who went looking into the video archives for ammo against Tamra. Twitter user Carlton Gebbitch (not to be confused with former RHOBH star Carlton Gebbia) posted the incriminating video clip from 2013, the same year Tamra and Eddie wed.

In the clip, Tamra and Eddie are having dinner at a Mexican restaurant. The way Eddie pronounces “Guacamole” prompts Tamra to joke about the situation in her one-on-one confessional.

“Eddie feels very at home in a Mexican restaurant and it definitely brings out Eddie’s inner beaner.”

Wow…… disgusting but not surprising … https://t.co/wRdQpcWuBn

‘Beaner’ is considered a slur to people of Mexican descent, though many people on Twitter commented that they had never heard the word before.

Kelly Calls the Clip ‘Disgusting but Not Surprising’

When retweeting the video snippet, Kelly added her own thoughts. She wrote, “Wow…… disgusting but not surprising ….”

The RHOC brunette then shared a compilation of tweets Tamra wrote in 2013 after a fan defended Tamra by saying the clip was doctored.

It’s not doctored I’m not sure why she’s lying … pic.twitter.com/AJKrPZrXdu

In one tweet, Tamra explained that he calls her “cracker” and it’s an inside joke between the couple. She also denies being racist on the basis that she married Eddie.

If I was racist I wouldn’t be getting married to [Eddie]. Beaner & cracker… Those are our nicknames. Relax!”

Tamra, Vicki Gunvalson and Shannon Beador have dubbed themselves the Tres Amigas. Some fans feel the group of friends is a clique and Kelly seems to agree.

She recently posted a photoshopped meme done by a fan. A photo of the RHOC cast at the reunion was altered to have amoebas over Vicki, Tamra and Shannon’s faces while Kelly was given a crown.

Tamra has yet to comment on the resurfaced clip. Fans recently urged Emily Simpson to be careful of being friends with Kelly.

Viewers will have to keep watching Season 14 of The Real Housewives of Orange County Mondays on Bravo to find out the cause of Kelly and Tamra’s feud.