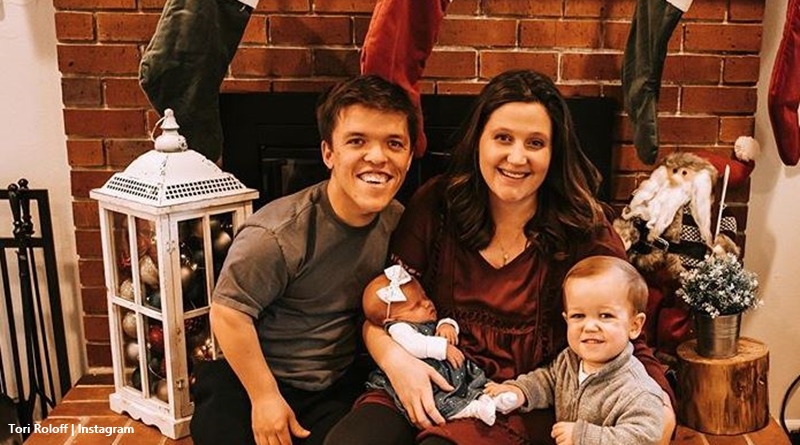 LPBW fans know that Zach and Tori Roloff love nothing more than decorating. And, now it’s time to fetch in the tree and start decorating for Christmas. But it’s freezing so they had a bit of a torrid time getting it done. However, at the end of the day, they managed. So, it bodes well for a happy festive season.

Cute little Jackson might look forward to Christmas, but Tori said he wanted nothing to do with Santa. They went off to get their tree, but things went a bit awry. Tori posted about it on Instagram. She shared a photo of herself, Zach, and Jackson. On Jackson, she wrote, “Jackson wanted nothing to do with Santa Claus and almost gave himself a concussion trying to get away.” Now, that sounds a bit funny, but they had even worse things ahead.

Tori noted that the weather really didn’t make for a pleasant day out. The LPBW mom said that they only just about survived their Christmas tree outing. None of them really dressed for rain, and her mom struggled with walking “in the snow.” According to Tori only her new baby Lilah and her hubby Zach coped with the day.  But, they learned a “big parenting lesson.”  However, at the end of the day, they managed to get their tree. But, exhausted, after that outing, they slept the day away.

Tori can’t post anything about her son Jackson without people adoring the little fellow. And interest in Tori’s new baby Lilah’s very high. TV Shows Ace reported that Amy and Matt Roloff both posted about the newest blessing in their lives. The Epoch Times reminds us that Lilah only arrived in the world about 12 days ago. So, LPBW fans can’t get enough of her. Nevertheless, right now Jackson still gets many adoring comments.

One fan said, “So cute!! Looking adorable in that hat Jackson!! 🖤” Another commented, “Jackson is the cutest!!! 😍😍😍😍😍.” Meanwhile, one follower said what so many people wish they could do: “Do you just stare at him and say how cute he is all the time? 😍😂😩.” Meanwhile, lots of people wished them a wonderful Christmas. Others complimented Tori on looking so good so soon after the birth of Lilah.

The LPBW Christmas tree outing also picked up some critics. One follower said it was “way too soon” to be out. Another noted, “That baby isn’t even a good 3 week’s and she’s got the baby in the snow! Wtf! And if she slips and falls with that baby they’ll both be in trouble. Some people just don’t know…better girl!”Another non-LPBW fan said, “Totally agree. To have that Newborn outside. Unbelievable !!!”

BARELY survived getting our Christmas tree today. Did not dress for snow or rain. Mom couldn’t walk well in the snow. Jackson wanted nothing to do with Santa Claus and almost gave himself a concussion trying to get away. Really the only one who held it together was lilah girl (and dad). Big parenting lesson today… But we did it. Got our tree. Now to sleep the rest of the day away. Lol #zandtpartyoffour #storyofzachandtori #babyjroloff #lilahrayroloff #toriroloffphotography

But, Tori and the other stars of Little People, Big World never reacted to that criticism. What do you think? Do you think it’s too soon to take baby outdoors? What about the big mission to choose their Christmas tree? Did you ever have such a torrid time? Sound off your thoughts in the comments below.

Remember to check back with TV Shows Ace often more news about LPBW.