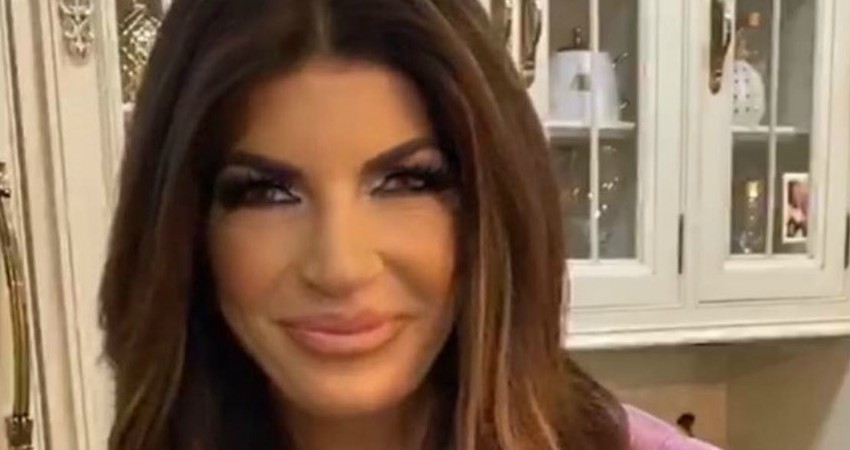 The Real Housewives of New Jersey star Teresa Giudice sculpted body is thanks to liposuction, claims company’s publicist. In 2018, Teresa shocked fans by entering into a bodybuilding competition.

“Mirror mirror on the wall, I’ll always get up after I fall and whether I run walk or have to crawl, I’ll set my goals and achieve them all”! 💪🏻This is a little “fitsproration” that got me through my days! This was a tough, draining and yet life changing experience that I would do again & again! Knowing that I was able to accomplish something that was only just a dream is beyond fulfilling! The feeling of accomplishments that I felt in the end is unimaginable & worth it. When you think you can’t , remember you can! Without these people by my side I wouldn’t have be able to finish this journey alone. Special Thank You to my father & my beautiful daughters for being my rocks & backbone through it all & never letting me cheat throughout my days! Also, my trainers, my posing coaches , my nutritionist & my forever glam team I love you all so much ❤️ @the1tlz @frank.catania @workoutlikeawoman & @sassyandclassyposing @jennitips & @mspriscillanyc So don’t give up you you! #Wedidit #beyourowncompetition

Teresa has continued to flaunt her toned body during a recent RHONJ trip to Jamaica.

However, the publicist for a company called Elite Body Sculpture claims Teresa’s incredible body is due partly thanks to a new non-invasive liposuction procedure.

Did RHONJ Star Get Liposuction?

Reality Blurb reports that a publicist for Elite Body Sculpture outed Teresa’s surgery on social media account. The publicist alleges Teresa had Air Sculpt on her “abs, waist and hips” in early September.

“Teresa Guidice looks fabulous here! My client Elite Body Sculpture provided her Air Sculpt on her upper and lower abs, waist and hips on Sept. 6. No stitches, no anesthesia, no downtime, no pain.”

A promotion Instagram page for Discover Jamaica features a bikini-clad Teresa overlooking the coast of the island.

#TeresaGiudice set pulses racing in a series of new photos from the Real Housewives of New Jersey cast trip to #Jamaica. http://ow.ly/5Mbu50xnvWL

The RHONJ star has yet to respond to the reports. She did, however, share a photo from the trip on her Instagram. Flanked by co-star Dolores Catania, Teresa looks relaxed in a long dress that shows her curves.

What is Air Sculpt

As the company rep said, Air Sculpt is a non-surgical, cutting edge liposuction technology. According to the company’s website, fat is removed through a small opening that heals naturally without a scar.

“Unlike liposuction which scrapes away unwanted fat with a tube resembling a cheese grater, patented AirSculpt technology removes fat cell-by-cell through a freckle-sized hole while simultaneously tightening your skin. Fat is removed through an opening that’s smaller than a pencil eraser. As the site heals, it leaves a mark similar to a freckle or natural skin blemish, instead of a noticeable surgical scar with tell-tale suture marks. No stitches means no need for a surgeon’s visit to have them removed. Instead, the entry site is left open to heal naturally and swelling can leave your body for faster healing.”

Teresa isn’t the only one with a new body. The reality star’s husband, Joe Giudice, spent his time in prison training for a possible career in MMA (Mixed Martial Arts.) As a result, he lost a ton of weight to the point where he was almost unrecognizable.

His daughter, Gia, shared the first post-prison photos of Joe when he Facetimed with her from Italy. Joe is still fighting his deportation case, but he chose to continue the fight in Italy instead of ICE custody.

Joe is still training for the thing. He often posts videos of his workouts on Instagram.

The Real Housewives of New Jersey airs Tuesdays on Bravo.

Matt James Dishes What Really Went Down In Fantasy Suites
Is This Why Myrka Cantu Took A Break From Instagram?
Katie Thurston Claps Back At Haters After Buzzy ‘Bachelorette’ Promo
Busby Fun This Weekend After Danielle Returned From Her Vacation
‘Days Of Our Lives’ Week Of May 10 Spoilers: Jake & Gabi In Love – Nicole Beds Xander?