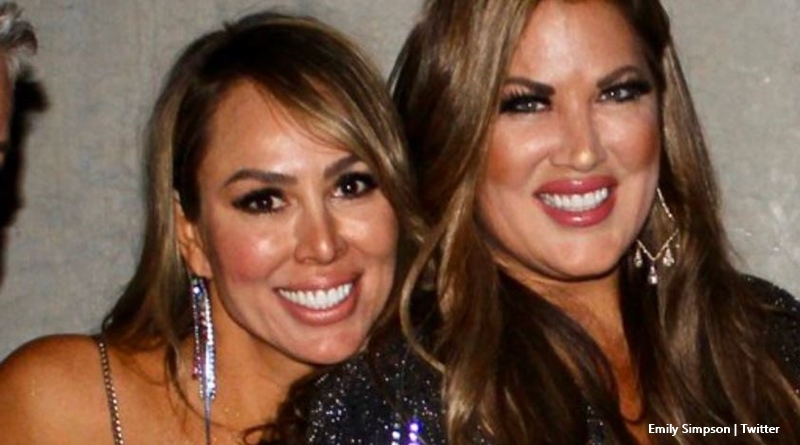 RHOC fans met Emily Simpson in Season 13 of the Bravo show. She gets on well with Kelly Dodd and stays clear of Tres Amigas mostly. But, on Thanksgiving, fans cautioned Emily about being friends with Kelly. Many of them feel she shouldn’t trust her not to round on her just like she does with the other stars in The Real Housewives of Orange County show.

Emily ran afoul of OG Vicki Gunvalson. TV Shows Ace reported that during the “House2Housewife panel” she said that Vicki should walk away from the show. Well, she allegedly still loves Vicki but maybe after she said that, the love won’t be returned.  And, that pretty much puts her in the firing line of the Tres Amigas. Tamra Judge, Shannon Beador, and Vicki comprise the threesome who foment and repeat rumors about the other cast members. The relatively fresh face of RHOC accumulated a lot of fans who care about her. And, they worry about Emily being friends with Kelly Dodd. After all, it’s not like she needs enemies.

Emily said on her Thanksgiving post, “I’m thankful for this friendship! @RHOC_KellyDodd. What do you all think of this season of #rhoc so far?!” Well, many people responded about how much they like Emily. And, lots of them liked that Emily brings something different from the Tres Amigas to the show. But, Reality Blurb reminds us that Emily already clashes with Tamra Judge who claims she’s “not the right fit for the show.” And, if Kelly Dodd turns on Emily, then she could end up isolated and hurt.

Fans respond with caution to Emily and Kelly Dodd being friends

Concerned fans spoke up about Emily relying on Kelly to be a faithful RHOC friend. Here’s what some of them said about it on Twitter:

But obviously, some RHOC fans do like that the two women hang together. One said, “I love it! @RHOC_KellyDodd has always been 1 of my top 5 RH since she started and she’s better than ever this season. And @RealOCEmily – I just adore how genuine, fun, beautiful, and smart you are. I hope neither of you leave!”

I think your crazy to think she will not flip on you just as Gina setting herself up too by Tamra. pic.twitter.com/JmWfWg5plp

Do you hope that Emily stays around and that Kelly remains her friend?

There’s always room to hope that Kelly Dodd might not turn around and bite Emily Simpson. Emily’s going through marital issues, and support is always good during tough times. But what are the chances Kelly hurts her in the long run? What do you think? Do you think that this time perhaps Kelly sticks around and they can remain friends? Or do you feel Emily should be cautious? Sound off your thoughts in the comments below.