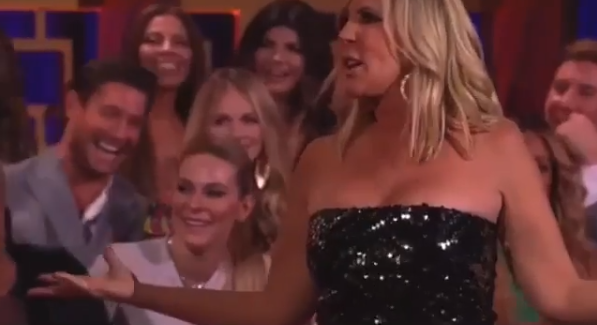 Vicki Gunvalson is allegedly trying to get her orange back. The Real Housewives of Orange County star has gone from Full-Time Housewife to Friend of the Housewives. After Vicki was demoted, she has been trying hard to make her big comeback. The reality star was so embarrassed about the demotion that she reportedly didn’t take it well behind the scenes.

Vicki Gunvalson’s popularity was on a steep decline over the years when she dated a notorious man who lied about his cancer diagnosis, including everything else in his life. Vicki is also notorious for spreading lies and gossip about others. On top of that, RHOC fans are fed up with Vicki’s lack of accountability. While she often provides financial and relationship advice, she can’t seem to win in those two areas.

According to various outlets, Vicki is desperately trying to get her orange back. According to Radar Online, Vicki could return to the show full-time next year. It sounds like Vicki has been working with Bravo producers behind the scenes to secure her spot once again. The spot has been currently filled by Tamra, who’s been in her share of trouble this season.

“Vicki is going to be coming back as a full-time housewife next season,” the inside source said. “She gave Bravo an ultimatum. She said she would only come back if she were full-time and they agreed.”

However, another insider told Radar that “no casting decisions have been made.” The first insider revealed that Vicki agreed to drop her lawsuit against Kelly Dodd and NBC Universal. She only dropped the lawsuit if she was able to return to the reality show next season.

Vicki first filed the lawsuit in November. In the court papers, she accused the network of defamation of character and libel. Vicki didn’t appreciate the fact that Bravo producers showed the clip of Kelly calling her a “con woman.” But the second insider insists that “there have been no agreements or deals made.”

This latest piece of news comes after Vicki told fans at BravoCon that she wouldn’t return to the series unless she is upgraded to full-time housewife, according to People.

“I’m never coming back reduced again,” Vicki said during a panel at Bravo’s first-ever fan convention. “Let’s just say that. I’m either in all the way, or out.”

It seems like Vicki Gunvalson was serious at the time. However, her comments were a stark contrast from what she said back in August. When she appeared on Jerry O’Connell’s talk show, she revealed she didn’t want to walk away from the very franchise she helped turn into a pop culture phenomenon.

“Our producer, Scott Dunlop, said, ‘Unless they kick you off the horse,’ don’t voluntarily get off the horse.’ So I’m still on the horse!” Vicki admitted. “I’m still riding the pony.”

However, there are some costars like Emily Simpson who believe Vicki should walk away from the franchise, according to a previous report via TV Shows Ace.

Vicki also admitted that she had no idea what the future holds for her. She’s just enjoying her time on the show and spending time with her friends. Vicki said that she had a lot of love for her friends and the franchise. Since then, Vicki has been having some road bumps with her costar Kelly, both on and off the screen.

Vicki Gunvalson sure knows how to stir the pot. But do viewers want her back? Do you think she’ll return to The Real Housewives of Orange County? Will you even watch if she returns full-time? Sound off below in the comments section.

And don’t forget to follow TV Shows Ace for the latest news on Real Housewives of Orange County.

New Photo Of Josh & Anna Duggar’s Son Michael Has Fans Confused
What Does Jacob Roloff Do For A Living & Does He Still Live In A Van?
True Reason Behind Amy & Matt Roloff’s Divorce: When & Why
Which ‘RHOC’ Alum Could Return As ‘Friend’ Of The Housewives?
Tori Roloff Says Matt Is Very Controlling – Here’s Why