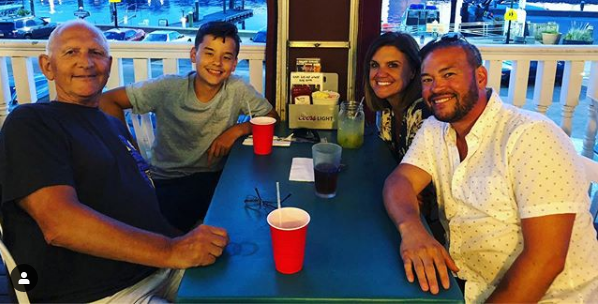 Jon Gosselin won’t be celebrating Thanksgiving with all of his children as he’d hoped. He reportedly “hates” that he will be having a small holiday. Instead, Jon Gosselin and his girlfriend Colleen Conrad are currently celebrating Thanksgiving with his 15-year-old kids Collin and Hannah in St. Croix. Jon and Kate still can’t come to terms with a fair custody arrangement, especially during the holiday season.

An inside source revealed to In Touch Weekly that he doesn’t like the idea that he can’t celebrate the holiday with the rest of his six children. Jon clearly still has issues with his ex-wife Kate Gosselin that have stemmed from their bitter divorce. The source revealed to the tabloid on Wednesday that Jon won’t “let get that in the way of him enjoying quality time with Collin and Hannah.”

As TLC fans know, Kate and Jon have been feuding ever since their 2009 divorce. Jon is currently estranged from his 18-year-old twins Cara and Mady as well as four of his 15-year-old sextuplets Aaden, Alexis, Joel, and Leah. The former reality TV star is currently working on rebuilding his life with the new love of his life and the two children he currently has custody of, according to the inside source.

“Jon doesn’t really care what [his ex-wife] Kate Gosselin has to say anymore,” the insider admitted. “He took his girlfriend Colleen, who he refers to as drama-free, a deliberate jab at Kate. He heard that some of the kids were jealous that they didn’t get to go, but that’s out of his hands, for now anyway.”

Jon wants a drama-free Thanksgiving holiday with his family

Jon Gosselin is done with Kate and the drama. While he’s “not afraid of Kate,” he’s not going to start any drama anytime soon. Even though Jon would love to have the kids together for Thanksgiving, he’s going to enjoy the time with the children he has, says the source. He also understands that it’ll take some time for the other kids to warm up to him, and he hopes they realize “he’s not the evil dad they thought.”

He’ll remain patient and hopes that the rest of his children will come around one day. As previously reported via TV Shows Ace, Jon looked happy when he posed with Collin and Hannah from St. Croix. This cozy family seems to be enjoying the Thanksgiving holiday in the sunny location. They also appear to have a good time enjoying the fun and going on outdoor adventures, as evidenced by Jon’s Instagram account.

Jon also took some time from his trip to share a photo of himself and Colleen together. He captioned the photo, “Vacation with my best friend and love.” The modern family visited Flyers Bar & Grill and Rhythms at Rainbow Beach to watch some American football. Jon’s newfound happiness is having fun with his children. He doesn’t want to deal with the negativity with Kate and his past.

Vacation with my best friend and love ❤️!!!

He’s focused on leaving the past in the past. Jon and Colleen are apparently happy to have these children in their lives. That’s all that matters to them right now. What are your thoughts on Jon Gosselin not being able to spend time with all eight of his children at Thanksgiving? Sound off below in the comments section.