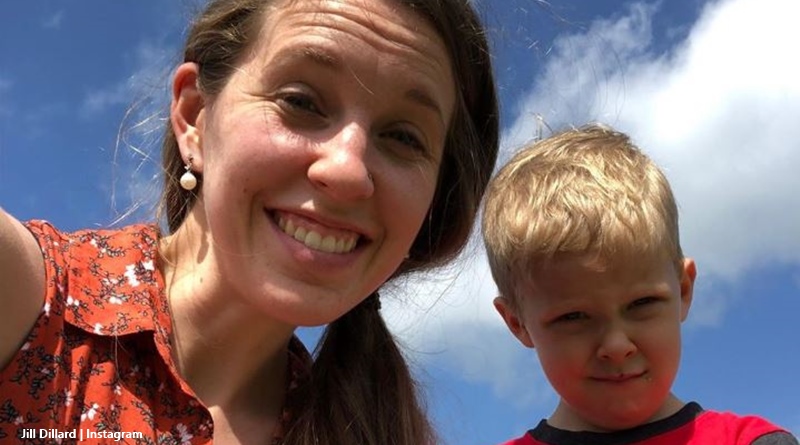 Jill Dillard often shares posts about Derick doing things with their two kids. TV Shows Ace reported recently that Derick and Jill even let the kids have some fun at Halloween. On Wednesday, she shared a photo of him out flying kites with the kids and it made for some nostalgic memories for fans. Is kite flying on the way out in the age of digital entertainment and gaming?

Taking to her Instagram, Jill shared a photo of Derick and the two boys. She captioned it with, “Enjoyed some kite flying time with papa yesterday before the storm blew in!” Well, it looks like Derick’s got the technique right, as the kite’s shown flying high above them. It seems that quite a few fans grew a bit nostalgic over the pic. Many of them shared their memories of playing outdoors with them as children.

One Jill Dillard fan said, “I used to love kite flying as a child, this makes me want to do it again x.” Another mentioned, “How fun! When we were kids my brother was the kite flying king! He would add string upon string until you could hardly see the kite and then still be able to real it in. Fun times!” But, it looks like some people still get out and about and fly kites these days as well. There’s a general perception that kite-flying’s an old-fashioned form of fun.

Fans still fly kites – is it dying out as a fun activity?

Those fans who still try and fly kites also spoke up about the current fun and frustration they enjoy. One said to Jill Dillard, “My entire life (I’m 37) have I ever gotten a kite to fly lol. Maybe PA just doesn’t have good airflow🤷.” When other PA fans agreed that kite-flying’s impossible there, another fan noted, “PA no longer the Keystone state but the Kiteless State 😞.” But, other more successful kite-flyers mentioned this time of the year seems the perfect time to play with kites in Arkansas.

Another notable event is held in Washington DC at the end of March. The Blossom Kite Festival brings the top US kite flyers. Plus, they compete against “experts from around the world.” A fun side of it is that they have activity tents for the kids. There, just like Jill Dillard’s kids, they learn to make and fly their own kites. Then there’s the Kite Fest Louisiane. Based in “West Baton Rouge,” it attracts tens of thousands of visitors. Once again, the fun event caters to the kids.

Other festivals mentioned show that for many people, just like Derick and Jill Dillard, the fun activity still has many supporters. What do you think about Derick teaching the kids to fly kites? Do you remember learning to fly them with all the fun and frustration? Sound off your thoughts in the comments below.

Remember to check back with TV Shows Ace often for more news about the family life of Jill Dillard.