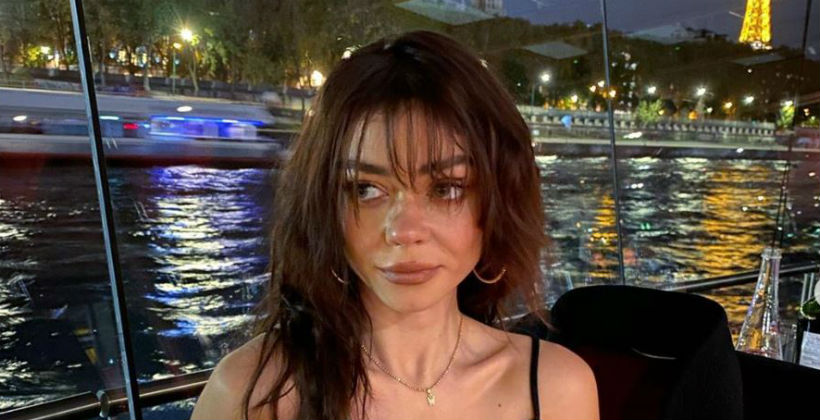 Modern Family actress Sarah Hyland is incredible at sharing things with her fans. She has endured a lot and is not afraid of speaking out about her illnesses. In a recent photo Sarah shared to Instagram, she posted in support of herself and her fellow invisible illness warriors. She says she hated this photo then rethought it and changed her attitude.

Sarah shares photo that made her insecure

Hyland took to Instagram sharing a photo of herself that she hated. She captioned the photo saying, “To my fellow #invisibleillness warriors. It’s ok to be insecure about your body. Just remember to check in with yourself at least once a day and say thank you.”

Sarah went on to say their bodies have all endured a lot that their minds do not even have time to comprehend. She also noted an important point. Sarah said her skin had a hard time bouncing back after treatment. Everyone is different and recovers differently.

She concluded saying, “I saw this picture and HATED it but quickly readjusted my attitude and decided to celebrate it. Love yourself and be patient. We are all stronger than we think we are.”

To my fellow #invisibleillness warriors. It’s ok to be insecure about your body. Just remember to check in with yourself at least once a day and say thank you. Our bodies have endured unfathomable feats that our minds barely have time to comprehend what has actually happened. With inflammation, excess water gain, and medications, my skin has a hard time bouncing back. I saw this picture and HATED it but quickly readjusted my attitude and decided to celebrate it. Love yourself and be patient. We are all stronger than we think we are.

US Weekly shared details about Sarah’s past illnesses. In 2012, Sarah endured her first kidney transplant. In 2017, she had to have another one. Along with her kidney issues, Sarah has suffered from endometriosis.

She revealed previously that after her body rejected the kidney her father gave her, she became very depressed. Sarah admitted to even contemplating suicide when the doctors told her she would need another transplant. Her second transplant took place shortly after her first date with Bachelor in Paradise alum Wells Adams.

Sarah was also accused of being anorexic around this time, which she spoke out against. The weight loss was due to her impending surgery and she let fans know about it. She said, “My circumstances have put me in a place where I’m not in control of what my body looks like.”

This is 29. The best part is? I get to share the rest of my birthdays with him.

In an interview with US Weekly in 2018, Wells Adams said, “Imagine having 16 surgeries, going to hundreds of doctors’ visits and taking thousands of pills. Imagine losing crazy weight because of dialysis, medication side effects and stress. Then imagine having to do it all over again. I know Gal Gadot is Wonder Woman on film, but Sarah is the real-life version.”

Another quote Hyland loves is from her mother. Sarah says, “I was born with so many health issues that doctors told my mother I would never have a normal life. And she said, ‘You’re right, she won’t — but it won’t be because of her health’ … If I can’t have an ordinary life, I might as well have an extraordinary one.”

And when it comes to fiance Wells, Sarah’s comment is so sweet. She said, “He’s seen me at my worst. I think that’s why I feel the most beautiful in his eyes, because he still finds me beautiful after seeing all that. It was a really intimate start to a relationship to have to go through those hurdles at the very, very, very beginning when you’re just even getting to know a person.”

Sarah and Wells have not set a date to get married just yet. They did, however, have a wonderful engagement party to celebrate their love for each other a few weeks ago.