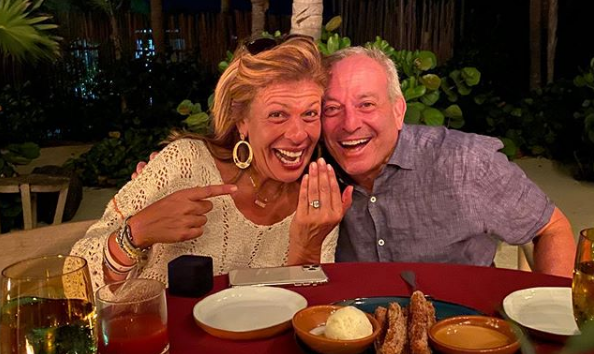 Hoda Kotb is engaged! The TODAY host revealed the heartwarming story behind her engagement ring. Joel Schiffman made sure that he picked out the ring. He enlisted the help of Hoda’s good friend Jennifer Miller to help him create the perfect diamond and sapphire shape.

She first flashed the ring on Monday’s episode of TODAY after breaking the news to her co-hosts that she and her longtime boyfriend got engaged over the weekend. According to Hoda, the engagement ring is a square-shaped diamond with sapphires around it.

Thx for all the love yesterday. Joel and I are overwhelmed❤️.

Hoda Kotb sat down for an exclusive interview with People about that magical moment when Joel popped the question. She said she was “touched” by the fact that Joel put thought and effort into choosing the right ring.

“What touched me so much about this ring is that he thought about it,” Hoda told the magazine. “And he thought about what I might like. He went to (Miller) and they were sharing things back and forth unbeknownst to me. He was giving her ideas.”

“He put it on and I was blown away by his choice, but I have to tell you I know so little about rings,” Hoda admitted. “I just don’t. I have worn the same bracelet and earrings for a year. If someone were to quiz me on what rings are which, I would be in last place. I wouldn’t know anything.”

Joel proposed to Hoda during a romantic dinner on their tropical vacation. Hoda was speechless.

“We ended up having a little dinner on the beach,” she revealed on Monday’s TODAY . “And he was like, ‘I have something else I would like to say,’ and he said some beautiful things, and then he got down on one knee. Then he said, ‘Would you be my wife?’ I was totally shocked. He had a good poker face.”

Joel and Hoda have been dating for six years. He was there for her when they adopted two children together, daughters Haley Joy, 2, and Hope Catherine, the latter of which was introduced to their family back in April. While Hoda loves her new ring, she still thinks the story behind it and the thought that Joel put into is what touched her the most.

“He knows I don’t care,” Hoda admitted. “He really knows that. But he said it was important for him to choose. And he did.”

Hoda also revealed that she wants to walk down the aisle soon. She told People that they’re both interested in getting married “sooner than later.” When it comes to the wedding plans, they’re already thinking of having a “destination wedding.” Hoda and Joel may get married at the same place they got engaged, but they haven’t set any plans as of yet.

Hoda also revealed that the couple hasn’t told their daughters yet. “We’re still trying to figure out that part,” she added. But Hoda feels really “grounded” and said she’s happy to call Joel her fiance. But she’ll be much happier to call him her husband.