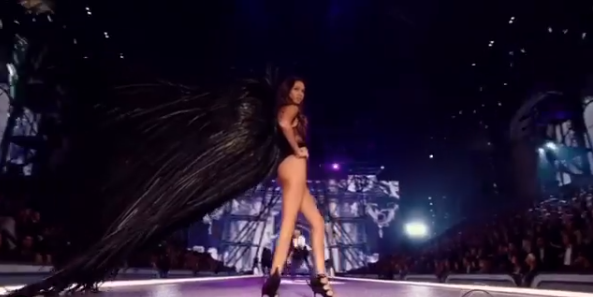 The 2019 Victoria’s Secret Fashion Show has been officially cancelled. It will not be a part of CBS’ 2019 holiday lineup. Sluggish sales and declining interest are just some of the reasons why the lingerie brand has pulled the plug on its annual special. For many years, the Victoria’s Secret Fashion Show was a clever marketing tool that made it popular among both men and women. However, the sexiest event of the year has been discontinued. The retail chain says it’s time for the company to evolve and grow.

Victoria’s Secret calls it quits on its annual fashion show

According to Sarah Spellings for The Cut, the Victoria’s Secret Fashion Show was the final blow to the struggling brand. If they continued to not air the show during CBS’ holiday lineup and if it never returns, then they could risk losing their top spot as the official lingerie brand for young women in America. But, critics slammed the brand for not having enough diversity in its fashion shows and marketing campaigns. Victoria’s Secret has also been guilty of objectifying its models.

NO SHOW THIS YEAR! Lais confirmed that there will be no show this year, but yes to the 2020!

What is Victoria's Secret Fashion Show for you? For many it’s a simple fashion show, a lingerie brand, something superfluous or something else. But I’ll tell what VSFS is to me… I think I was 14 when watched the first show in 2012 (one of the best years ever). I have never heard of VS, nor Angels, and at this moment I was delighted with the whole show, everything seemed magical! The most beautiful models in the world, just wearing lingerie and huge wings, I wanted be one of them hahaha but the funniest fact of all is that I'm a boy! With time I has been following the brand and every single year I’m looking forward to the show, has become almost a tradition for me throughout the year. In 2015, I started this account and in almost 1 year, I had over 100 thousands followers, I can’t believe. Several models noticed me, Candice wished me a “happy birthday” and Alessandra follows me to this day, it's amazing! We know this year won’t have the long-awaited, traditional Victoria's Secret Show. The brand in recent years has completely lost its luster, the shows have been hunted and nothing innovative, VS seemed to be afraid to change. It brought “instamodels”, it advertises in every way but the audience and the public interest diminishes… A brand that had as major models in the world in its casting as Gisele Bundchen, Adriana Lima, Heidi Klum, Tyra Banks and even Naomi Campbell crossing her catwalk began to decline and depend on "itgirls" to increase her audience? Also, it's 2019 and it's new times. Representativeness is so important! We know that VS was nothing inclusive, nothing diversity, just like the fashion world in general. I can't speak for women, after all I'm not one, but imagine how important it’s for them to feel represented, with their bodies, with their skin, with their hair, with their personality. After all each one have their kind of beauty and we are all different. I have a lot of respect for Ed Razek, the brand's former CEO, he made a great Victoria's Secret, but when he said didn't need a trans model on his show, I completely disagreed because I think it's important to bring a trans woman, a asian woman, a latina, a russian… CONTINUE IN COMMENTS

The official announcement of the cancellation of the 2019 Victoria’s Secret Fashion Show just comes after several months of bad publicity. CEO John Mehas was criticized for his direct ties to Jeffrey Epstein, the late billionaire who was accused of sexual abuse of young women and girls. The brand was also criticized for its awful beauty standards.

Who needs Victoria’s Secret when there’s Savage X Fenty? Victoria’s Secret is known for its ads which featured the slogan “THE PERFECT ‘BODY'” sprawled across images of its skinny and busty supermodels. Rihanna’s lingerie brand has received praised for being empowering and representing women of all shapes, sizes, and ethnic groups. She also features women of color and disabled women in her fashion shows.

“I’m looking for unique characteristics in people that aren’t usually highlighted in the world of fashion as it pertains to lingerie,” Rihanna said during the behind-scenes-footage at one of her fashion shows. “It’s very important that the casting tells the narrative of what the brand stands for. What we stand for mainly here is exclusivity.”

As if she needs an introduction! We’re SO Xcited to announce that @normani is officially a #SavageXAmbassador and she’s bringing ALLLL of her baddie self to this holiday SZN. Need some “Motivation” to stay hawt during the holidays? Peep the link in bio! ♥️ #SavageXNormani #TisTheSavage

The news of the cancellation comes just as CBS announces its 2019 holiday TV lineup. As you may know, the Victoria’s Secret Fashion Show usually airs on CBS during the holiday season. So, what will fill its spot? It turns out that CBS wants to focus on cheesier and classic holiday shows this season, according to Magnolia State Live.

The 2019 holiday lineup kicks off with The Thanksgiving Day Parade on CBS. Then the kids will enjoy Frosty the Snowman and Frosty Returns on Friday night, Nov. 29. The rest of the lineup includes Robbie the Reindeer, The Story of Santa Claus, Rudolph the Red-Nosed Reindeer, the 42nd Annual Kennedy Centers Honors, and the I Love Lucy Christmas Special.

However, there’s one new holiday special included in the lineup. A Home for the Holidays with Idina Menzel will make its premiere on Sunday, Dec. 22. It looks like this new special will replace the 2019 Victoria’s Secret Fashion Show.