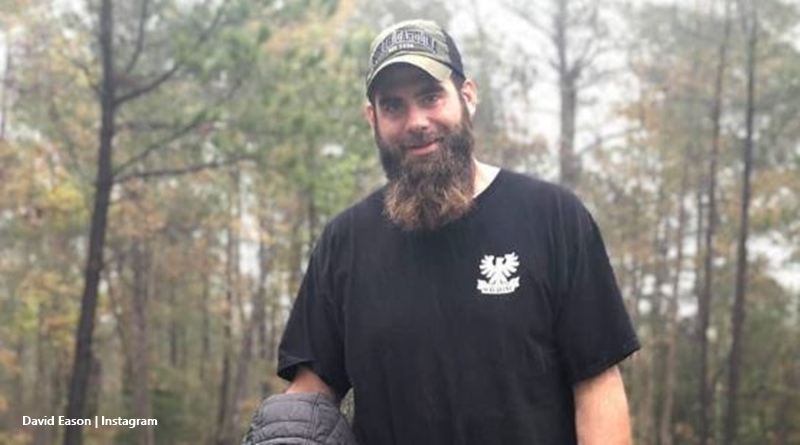 Teen Mom 2 fans heard that David Eason started his Black River Metal And Wood business in early August. At the time, TV Shows Ace reported that he’d just made his first hand-crafted knife. Actually, many fans hated that he made weapons. But, over the months, he got lots of appreciation from fans. And, he’s making other things as well. Now, he opened his eBay account, and he’s already got bidders.

David gets on with life on The Land without Jenelle. In fact, according to E! News, he claims he’s much happier now she’s left. They cited him as saying on Facebook, ‘I’m not heart broken. I’ve realized I wasn’t in love and there are much better people out there for me.'” And, he keeps himself busy feeding his animals and making his Black River products. Many fans asked him to start selling his products and now he opened an eBay account.

David notified his fans on his Instagram about his new eBay site. The Teen Mom 2 alum shared a photo of a coat rack and suggested they  “check out the Ebay link in [his] bio!” It showed a picture of a coat rack made out of “Railroad spike hooks and burned wood.”  Fans reacted to the post and one said, “Love this! Have a huge one somewhat similar….made from some old wood about three times as long….. creativity is priceless.” Others also loved his work and no doubt, some of them went across to eBay as some items already got bidders.

Handmade coat rack for sale. Railroad spike hooks and burned wood with live edge! Holds 10 or more coats or hats! Check out the Ebay link in my bio!

The eBay account opened on November 15. There’s no way of telling if bidders follow Teen Mom 2 or not, but people obviously like his work. The coat rack he talked about on Instagram didn’t sell yet, but 14 people watch the listing. That’s up for $150 as a “buy now.”  Another item he posted up shows a “Railroad spike knife, 12″ long, finger hole, wood handle, hammered finish.” So far, two people bid on it and the price sits at  $177.50.

The other items listed so far include two more hand-forged railroad spike knives listed at $100.00.  These listings also garnered some watchers. As the account’s still very new, no buyer feedback has become available yet. Those Teen Mom 2 fans from outside the country might discover he doesn’t ship outside the USA though. Considering his first auction’s not over yet, it looks like sufficient interest might lead him to long-term success. After all, it takes time to build up a good reputation as a seller on the site.

What do you think about David Eason opening a new eBay account to sell his Black River Metal And Wood products? Are you pleased that he’s finally doing something positive? Sound off your thoughts in the comments below.