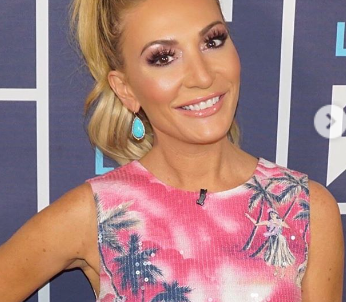 Kate Chastain is addressing her latest feuds. She recently shocked Below Deck fans when she revealed that she’s no longer friends with Hannah Ferrier during her interview on the Daily Dish back in October. Kate is finally opening about what led to the downfall of their friendship. Kate did not hold back when she talked about Hannah during the Below Deck panel at this past weekend’s BravoCon.

Chief stew Kate Chastain attended the event alongside Captain Lee Rosbach and Chef Ben Robinson. During the Q&A portion of the event, an audience member asked Kate what she thought of Captain Sandy Yawn’s criticism of Hannah’s tables. As previously reported via the Bravo blog, Kate admitted that she agreed with the Below Deck Mediterranean boss.

“Over the years, watching Hannah, I could just always tell that we had very different styles of being a chief stew, but I just wanted to be supportive,” Kate said. “But now, we’re not really friends because I heard she was talking poorly about me behind my back.”

Another audience member took the opportunity to ask Kate what exactly Hannah said that made her question their friendship.

“I mean, she said a lot of things, and they weren’t true, which really bothered me,” Kate said. “She’s just kind of a person I don’t trust.”

Kate did admit that she confronted Hannah about the issue. She texted Hannah stating, “You know, I don’t like what you said.”

Kate revealed that Hannah left her on “unread” and never responded to her text. If Hannah took the opportunity to apologize, then Kate would move on. But Hannah hasn’t apologized, and Kate hasn’t forgotten.

Hannah Ferrier isn’t the only Below Deck cast mate that Kate has been feuding with lately. During the BravoCon panel, Kate revealed what happened with third stew Caroline Bedol. It all started when Caroline tweeted that a fan asked Kate about the verbal abuse she endured last season. While Caroline wouldn’t give any details, Kate, who hasn’t publicly commented to any of Caroline’s controversial tweets and accusations, finally addressed them, according to Showbiz Cheatsheet.

As Below Deck fans know, Caroline is very active on Twitter. She’s still lashing out at her Season 6 Below Deck cast mates. Caroline is desperately trying to get fans to understand what she’s been through on the show. She often tags Kate in her tweets, but since Kate blocked her, she hasn’t responded to any of her remarks.

Kate insisted she wasn’t the only bully on the yacht. She insisted that Caroline also made her share of crude remarks.

Other crew members said that Caroline couldn’t handle the tough workload and appeared distraught for most of the yachting season. Even if Kate wasn’t the only bully, she is well-known for her sharp tongue on and off the show. As TV Shows Ace previously reported, Kate got into a feud with Teddi Mellencamp of RHOBH fame on Twitter.

Below Deck airs on Mondays at 9/8c. What are your thoughts on Kate Chastain’s latest feuds? Sound off below in the comments section and be sure to follow TV Shows Ace for the latest news and updates on Below Deck.

Todd Chrisley Talks About People Who Stab Him In The Back
‘When Calls The Heart’ Star Chris McNally Joins ‘Riverdale’ In Mystery Role
‘RHOC’ HUGE Cast Shake-Up: Who’s In & Who’s Out For Season 16?
‘SSW’ Sidian’s First Wife, Jennie, Ends Rumors In Tell-All Exclusive: Part 1
WOW! Matt Roloff’s 2021 Net Worth Might Shock You