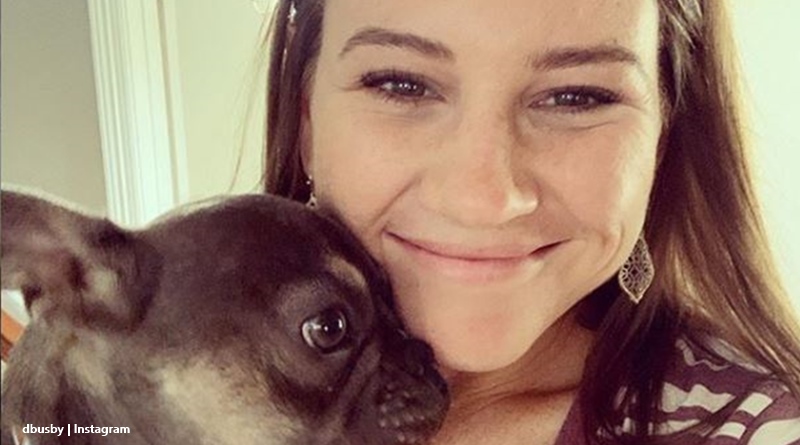 OutDaughtered fans heard that Danielle Busby went for hysterectomy surgery a week ago. TV Shows Ace reported that just a few days later, she went home where she’s been recovering. Poor Danielle said on her Instagram that when she did a follow-up visit to the doctor she suffered terrible pain.

OutDaughtered – Danielle Busby shares about her terrible pain after the hysterectomy

Taking to Instagram, Danielle showed that despite the terrible pain she suffered at the doctor’s rooms, she still appreciates the funny and ironic side of life. She shared a photo of her on the couch at home with Beaux-dog. Danielle captioned it with, “What a morning!!! 😱😭I experienced the worst physical pain I have ever had in my life at my doctor’s office this morning.”

But then the OutDaughtered mom noted something rather wryly about her tee-shirt.  “as I lay down on the couch, with my “guard dog” 🐶 @beauxbuzz, I realized what shirt @adambuzz gave me this morning when I told him I needed one of his shirts to wear.” It said, ‘HAVE A NICE DAY'” 👍🏻 LOL! That’s all I want…A nice day and the pain to go away!”

Fans debate what could be so painful

Naturally, many fans of the TLC show who also experienced hysterectomies follow Danielle closely. After all, they know what she’s going through. But, some of them wondered how come she suffered so much pain. Some fans suggested she had staples removed. One follower asked, “Was it from taking the staples out? It’s literally the worst!” Well, we don’t know if Danielle had staples. But, it’s plausible.

Health Harvard notes that often staples get removed about a week after surgery. And, it’s been a week since the OutDaughtered mom of quints had her surgery. The website also notes, “If you have had an abdominal hysterectomy, the soreness at your incision site should ease gradually over a period of about two to three weeks and the strength of the incision heals in about six weeks.” So, hopefully, the pain soon leaves Danielle able to get on with her busy mom-life.

Some  fans say they never experienced much pain, others weren’t so lucky

Some fans agreed that Danielle warranted all their sympathy as they suffered terrible pain as well. One OutDaughtered fan said, “idk if they do or not but when I had my hysterectomy they used them, and my first follow up had me in more pain than when I first woke up from the procedure.” Another agreed, writing, “It is God awful pain and it took me almost 10 weeks to feel human again. BUT, once I healed.. it was a magical transformation. Hang in there!! It does get better.”

What a morning!!! 😱😭I experienced the worst physical pain I have ever had in my life at my Doctors office this morning. And as I lay down on the couch, with my “guard dog” 🐶 @beauxbuzz , I realized what shirt @adambuzz gave me this morning when I told him I needed one of his shirts to wear. “HAVE A NICE DAY” 👍🏻 LOL! That’s all I want…A nice day and the pain to go away! @walkinlove XOXO TJ&Brooke #haveaniceday #itsabuzzworld

However, other fans felt very little pain. So, it seems that it depends on the type of surgery done. Plus, bear in mind Danielle also got some work done removing endometriosis from her intestines. Also, she produced quints, which couldn’t have been easy. What was your experience with hysterectomy surgery? Like Danielle Busby did you experience terrible pain? Or, did you cope with it okay? Sound off your thoughts in the comments below.